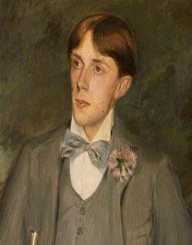 Aubrey Vincent Beardsley was born on August 21, 1872, in Brighton, England to Vincent Paul Beardsley and Ellen Agnus Pitt. The family relocated to London in 1883. As a child, Beardsley was talented musically and played alongside his sister Mabel Beardsley at concerts. He received education at Brighton, Hove and Sussex Grammar School from 1885 to 1889. Beardsley's drawings, poems, and cartoons were published in the school’s magazine.

At around 16 years, he worked in an architect’s office and later with the Guardian Life and Fire Insurance Company. His interest in arts surged during this period and heeding to the advice of Pierre Puvis de Chavannes and Sir Edward Burne-Jones, he decided to take arts as a profession in 1891. The following year, enrolled in classes at the Westminster School of Art, under Professor Fred Brown.

Aubrey Beardsley moved to Paris in 1892. Whiles there, he came across a poster art of Henri de Toulouse-Lautrec, and the Parisian fashion for Japanese prints. This had a strong influence of on his works and style. The majority of his works were in ink, featuring large dark areas juxtaposed with large blank ones alongside areas of fine detail contrasted with areas with none at all.

His illustrations were in black and white with a white background. In 1893, he received his first commission work, Le Morte d’Arthur by Thomas Malory from the J.M Dent and Company. Beardsley's early works were mostly left unsigned until the 1891 and 1892 when he started signing with the initials A.V.B. He later adopted a Japanese-influenced mark sometime matched with the initials A.B. He used that signing for his Le Morte d'Arthur and The Bon Mots works.

Aubrey Beardsley collaborated with writer Henry Harland to found The Yellow Book, serving as the Art Editor for the first four editions. He also produced the cover designs and some illustrators. Beardsley was also associated with the Aestheticism, the British counterpart of Decadence and Symbolism.

Aubrey Beardsley was described as asexual. He was associated with the homosexual group that included Oscar Wilde. There were several rumors about his sexuality, and he was alleged to have had an incestuous relationship with his sister Mabel. Beardsley was struck with tuberculosis throughout his career. He also suffered lung hemorrhages which mostly prevented him from working and leaving home.

Beardsley converted to Catholicism in 1897 after which he pleaded with his publishers to destroy all obscene drawings including Lysistrata. However, his request was rejected. His health continued to deteriorate forcing him to leave for French Riviera. He died on March 16, 1898, at age 25 of tuberculosis at the Cosmopolitan Hotel in Menton, France.