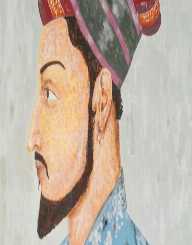 Aurangzeb was one of four sons of the fifth Mughal Emperor, Shah Jahan. He was born on the 3 November 1618 in Dahod, Gujarat. When he was a child, his father was governor of Gujarat. He was ten years old when his father became the fourth Mughal Emperor in 1628.

When their father became ill in 1657, all four brothers claimed the throne. Aurangzeb’s eldest brother Dara Shikoh (1615-1659) was their father’s heir and was living at court as the heir apparent. Aurangzeb was governing the Deccan. His brother Shuja was governing Bengal, Bihar, and Orisa and his third brother was governing Gujarat and Malwa.

Aurangzeb attacked the capital of Agra, defeated Dara Shikoh and took his father prisoner. He took over the throne in 1658, and Dara Shikoh was sentenced to death in 1659.

Aurangzeb ruled for forty-nine years and was active in many military excursions aimed at extending the borders of the Mughal empire. His army had over 500,000 camp followers, 50,000 camels, and 30,000 war elephants. The size and pace of his army laid it open to guerilla warfare from the Maratha. (The Mughal Empire, John Richards).

He had many enemies, including the Sikhs. He had their leader; Guru Tegh Bahadur killed when Bahadur refused to convert to Islam. Aurangzeb also held a grudge against the Sikhs because they gave shelter to his brother Dara during his fight for the throne.

In later years, as his grip on power lessened and his empire began to disintegrate one of the reasons given was his harsh treatment of Hindus and the reversal of liberal religious policies. Other historians felt that the sheer size of his empire and lack of loyal supporters was another cause.

The Mughal Empire was no longer a meaningful part of Indian political life after Aurangzeb died on 3 March 1707 and its influence gradually declined.