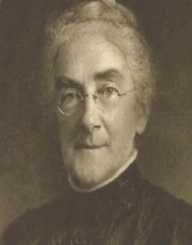 Ellen Henrietta Swallows Richards was an American scientific scholar and early female educationist who encouraged the women folk to study sciences in America.

Ellen Henrietta Swallows Richards was born on December 3, 1842. Born in Littleton, Massachusetts, she was an only child to her parents. Her parents were Peter Swallow and Fanny Taylor.

She went to Westford Academy. At Westford, she studied mathematics and classic Latin, French and German languages. She graduated from the academy in 1862. In early 1863, she moved with her parents back to Littleton. Her father, Peter Swallow started a business store to expand the family’s financial income. Richards became a teacher in languages. In 1865 she resigned from her job to care and nurse her ailing mother. In the meantime, she became involved in the family business store.

In September 1868 she returned to school. She enrolled for studies at the Vassar College. She graduated in 1870. She later earned her Master degree in Chemistry in 1873. She was denied entry to apprentice at the Massachusetts Institute of Technology after her Bachelor degree in Vassar College. Richards applied to be admitted as the first female student. In December 1870, she received her admission letter to the MIT in Boston. She became a special student program.

In 1873, she graduated with a Bachelor Degree in Science. She never got her a doctorate degree. She was denied the honors for being a woman.

She volunteered to lecture at the MIT without any pay. She stayed as an unpaid tutor until 1878. Inn1884 she started working under her husband. She helped him in his experiments and other work-related chemistry projects. Later in 1884, she was appointed to the MIT sanitation laboratory. Richards became a sanitation teacher.

She continued serving in the institute while being a member of other organizations. She was a member of the Commonwealth’s water analyst. She served at the commonwealth’s office for ten years from 1887. During this time Richards doubled as the nutritionist consultant for the US National Agriculture Department.

During her stay at the MIT, Richards conducted extensive researches on various scientific branches. She did chemical projects on air, water, and sanitation. She did experiments on minerals. She also managed experiments in domestic hygiene and sanitation. Richards broadened her studies to the human wellbeing. She studied how the human wellbeing correlates with the balance of chemicals in the body.

Richards was at the forefront of the fight for the elevation of the women in science education. She faced stiff opposition. She partnered with the Woman’s Education Association to champion the rights for equal studying opportunities in the scientific world. She introduced the learning of Chemistry as a subject at the Girls High School, a girls’ only school in Boston.

In November 187 she managed to lobby for funding for the creation of a women’s only laboratory at MIT. She stocked the laboratory with the help of her friends and other women’s educationist groups. She used the laboratory to sensitize the average housewives on the need to understand the chemical composition of the household. Richards conducted tested on the daily groceries and other common household items. She submitted her findings to the State Board of Health for statistical data collection.

Richards documented her findings in a publication the chemistry of Cooking and Cleaning. She joined a correspondence journal to help women understand the scientific columns. In 1878, MIT opened doors for female students in the science programs. The Women’s laboratory was opened to all students. In 1883, Richards was appointed to teach at the Sanitary Chemistry department at the institute. She was literary the head of the Sanitation laboratory. She was in charge of students learning the chemical analysis process of water, sewage, and air. She continued with her research in the world of Chemistry. Richards worked at the MIT until her death.

Richards was married to Robert Richards in 1875. As a champion for the less fortunate in society, she instituted other programs during her private time. In 1894 she founded the School Feeding Program in Boston. She piloted the program in several Boston schools. Children from poor backgrounds had nutritious food at extremely subsidized prices.

Ellen Richards died on March 30, 1911, in her native Boston Massachusetts. She was 68 years of age.  She was buried in Maine, USA.

Richards helped create space for future generations of women in the field of scientific studies in the US. She founded the school feeding program in 1894. Years later, President Harry Truman signed into law the school lunch feeding program.