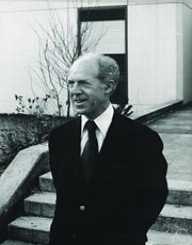 William Forsyth Sharpe was born on June 16th, in 1934. He is famous for being an American economist. Due to his economic prowess, he has been awarded a Nobel Prize primarily for coming up with Capital Asset Pricing Model. He is also credited for coming up with the Sharpe ratio which can be utilized in performance analysis. In the valuation of options, Sharpe also came up with a method known as the binomial method.

William Forsyth Sharpe was born on June 16th, 1934. His place of birth was in Boston, Massachusetts. Before settling down in Riverside, Canada, his family migrated from place to place. This is for the reasons that his father served as a National Guard. Sharpe was brought up in Riverside until he became a teenager.

William Sharpe went for his high school education at Riverside Polytechnic High School where he later graduated in 1951. After that, he went to the University of California situated in Berkeley. During this time, he had the intentions of pursuing a degree in medicine.

While still in his first year at the University of California, William Sharpe changed careers and went on to study Business Administration. He had to change schools, and he enrolled with University of California, Los Angeles. Again, he soon realized that accounting was not his thing and he changed courses this time majoring in Economics. As an undergraduate, the professors that had a considerable influence on his career were Armen Alchian and J. Fred Weston.

After graduating from the university, William Sharpe went on to work with RAND Corporation where he undertook his research. At the same time, he soon strived for his Ph.D. at the University of California. He was still being supervised by Armen Alchian and also kept communication with his undergraduate mentor J. Fred Weston.

Later, he moved to Seattle where he took a job at the University of Washington as a finance professor. It did not take time before he initiated his exploration into asset pricing. From here, he came up with the idea of Capital Asset Pricing Model (CAPM). This was followed by a paper he submitted to Journal of Finance which described in detail how the model worked. This paper was officially published in 1964 after two years after being considered as irrelevant.

In 1968, William Sharpe relocated to Irvine where he also taught at the University of California. After spending two years here, he again moved to Stanford University. Here, he continued researching into investments field. In a little while, he collaborated with Frank Russell Company and established the Sharpe-Russell Research.

Years later, in 1989, William Sharpe officially retired from teaching. Nonetheless, he maintained the position of Professor Emeritus in Finance at the Stanford University where he initially taught. In the late 1990s, he established Financial Engines. He also offered his services as the American Finance Association’s president.

In 1986, William Sharpe wedded Kathryn, a famous painter. They are blessed with two children in their marriage.