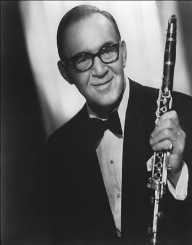 Benny Goodman was born on May 30, 1909, in Chicago, Illinois, USA. Benny Goodman came from a large, and poor, Jewish family. His parents were David Goodman and Dora Grisinsky. He was the ninth child out of a family of twelve.

The Goodman family had to leave the Russian Empire to live in the United States. Still, the family struggled with finances. They lived in the slums of Chicago, surrounded by other poor immigrant families who came from all over Europe. Benny’s father worked hard to support his family.

Even with all of the hardship around him, Benny was able to find something that he loved: the clarinet. He began to play the instrument when he was only ten years old. Soon after, he started to take lessons from James Sylvester and Franz Schoepp. The training he received, as well as inspiration from other great clarinetists (like Jimmie Noone), encouraged Benny to play professionally.

Benny Goodman joined the American Federation of Musicians when he was only 14 years old. This was a serious commitment, and he had to quit his other studies to focus on his music. Benny Goodman joined the Ben Pollack Orchestra when he was 16 years old, in the late 1920s. He released his first solo album, A Jazz History, in 1928. He made his band, The Benny Goodman Orchestra, in the 1930s. He was one of the first bands to be integrated (having both black and white people) in the city.

Benny played mostly jazz and swing music, and some would say that he brought an element of class to the genre, as well as a newfound appreciation for the sound of a clarinet. He often played in television programs and on the radio. He even wrote many of his songs for the band. He also recorded a song with the famous singer, Billie Holiday in 1933.

Some even credit Benny Goodman for beginning the Swing Era of music with his orchestra in the middle of the 1930s. He continued to record music with singers also after he started his band. Together, with various musical artists, he had some chart-topping hits. He played in the Big Broadcast in 1937, and he had a show at Carnegie Hall in 1938, which was the talk of the town for days.

Benny Goodman also played classical music. He (along with the Budapest Quartet) recorded a cover of Mozart’s Clarinet Quintet in A Major in 1938. By the end of the 1930s, Benny Goodman was a bonafide hit. He was as famous as any clarinet player could ever hope to be. He continued to be an excellent clarinet player and a strict bandleader until the end of World War II when his music started to lose popularity as the Swing Era came to an end. It is around this time that he disbanded his orchestra.

After The Benny Goodman Orchestra broke up, Benny went on to play in other, smaller, groups around the country. Around the 1950s and 1960s, Benny Goodman began to spend most of his time overseas. In 1971, he recorded an album called, Benny Goodman Today. Benny Goodman continued to play music until days before his death.

Benny Goodman acted as himself in several movies, including The Big Broadcast of 1937. Once the film’s success was evident to Benny, he went on to create more movies, including Syncopations and The Hollywood Hotel. He also starred in the movie; A Song is Born.

A movie based on his life, The Benny Goodman Story, aired in 1955. In the film, he was played by Steve Allen. Benny Goodman recorded the soundtrack for this movie, and many of his real-life friends had parts in it.

Although he never went to college, Benny Goodman was given honorary degrees from both Brandeis University and Bard College for his accomplishments in jazz music.

Shortly before his death, Benny Goodman received the Lifetime Achievement Award from the National Academy of Recording Arts and Sciences.

Benny Goodman married Alice Hammond Duckworth in 1942. Together, the couple had two daughters: Benjie and Rachel. They remained married until death separated them when Alice died in 1978.

Benny Goodman suffered a heart attack, which soon after caused his death on June 13, 1986, in New York City, New York, USA. He was 77 years old when he passed away.