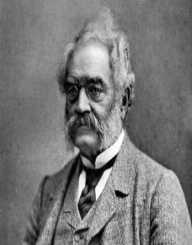 Ernst Werner Siemens was born 13th December 1816, to Christian and Eleonore Siemens. He was born in Lenthe, Kingdom of Hanover, German Confederation. Today, the area is known as Gehrden and is located near Hanover.

His parents were tenant farmers, but the family had a rich history and was documented as far back as 1384. It was a large family, and Siemens was one of 14 children.

Siemens had an aptitude for the sciences when in school. He was hoping to go to “Bauakademie” which was a well-known technical school to advance his studies, but his parents didn’t have the money to send him there.

Siemens then joined the military, and between 1835 and 1838, he completed his schooling at the Prussian Military Academy, School of Artillery and Engineering.

While serving in the military, Ernst Werner Siemens invented electrically-charged sea mines. These were used against the Danish blockade of Kiel. When he returned home after the war, Siemens continued to experiment.

Siemens’ forte at the time was working on technologies that already existed, to make them better than they initially were. One such technology was the telegraph machine. Siemens invented a telegraph that used a needle to point to the letters in place of the Morse code which was already in use.

With his new telegraph machine, Siemens co-founded Telegraphen-Bauanstalt von Siemens & Halske in October 1847. His partner in the company was Johann Halske, a precision mechanic. The company soon went international, and two of Siemens’ brothers came on board to manage the international branches in England and Russia. Siemens worked in his company until 1890, after which he retired.

Ernst Werner Siemens made significant contributions to many inventions and had several patents in the United States and other countries. He continued research in the field of electrical engineering, and upon continuing the work of British scientist, Michael Faraday, Siemens discovered the principle of dynamo-electrics. This formed the platform of being able to use electrical energy as a power source.

In 1879, the company was able to show the first electric railway in the world at the Berlin Commercial Exposition.

An entrepreneur with a Social Conscience

Ernst Werner Siemens was many years ahead of the times as an entrepreneur with a conscience. In 1872, he set up a Pension, Widows’ and Orphans’ Fund. This was put in place more than ten years before Germany instigated their national pension scheme.

Siemens was also politically active over the years, and between 1862 and 1866, he served in the Prussian State Assembly, representing the Dutch Liberal Party.

In 1877, Siemens was appointed to the Prussian Patent Office, as he was a strong advocate for patent protection. This office is known today as the German Patent and Trade Mark Office.

In 1979, Ernst Werner Siemens became a founding member of the German Engineering Society, which worked on establishing professorships in electrical engineering at the technical universities.

Ernst Werner Siemens received various honors through his life, some of which include:

1860:   Awarded Honorary Doctorate from the Philosophy Department, University of Berlin

1886:   Inducted as a member of the Prussian Order Pour le Merite for Science and the Arts

1888:   Raised to the status of nobility by German Emperor Friedrich III. This included being

Ernst Werner Siemens married Mathilde Duman in 1852, and the couple was together until Duman died in 1865.

Two years later, Siemens married for the second time. He married Antonie Siemens, who was a relative.

Siemens had six children over the period of his two marriages.

In the 1880s, Ernst Werner Siemens donated both land and money, for the construction of the National Metrology Institute in Berlin.

Siemens was the founder or co-founder of four companies – Siemens, Siemens Mobility, Siemens Magnet Technology, and Siemens & Halske. Siemens & Halske has been known as Siemens AG since 1966. His brother Carl later ran the company, followed by his sons, grandsons, and great-grandson.

It is one of the largest electro-technological companies in the world. The von Siemens family still own shares in the company and also have a seat on the supervising board.

Ernst Werner Siemens has created a wonderful legacy to society, not only by his generosity but by introducing great inventions that in the modern world are taken for granted.