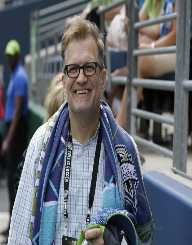 Drew Carey is a name familiar to almost every American household. He is the host of popular TV shows like Whose Line Is It Anyway, The Drew Carey Show, and The Price is Right. As a comedian and a Game Show host, Carey has had a long and popular career.

Drew Carey was born as Drew Alison Carey on May 23, 1958, in Cleveland, Ohio, United States. He is the third and the youngest child of Beulah and Lewis Carey. When he was 8, his father died due to a brain tumor leaving behind his mother, two older brothers and him. To suppress his grief, Drew Carey dived into the world of books and took the help of comedy to combat his depression.

While his mother worked multiple jobs to make ends meet, Carey’s depression grew worse every day. After attending the Rhodes High School where he was a trumpet player in a marching band, Carey went to the Kent State University. Drew Carey gave into his depression and attempted suicide. He was later expelled on the grounds of falling grades. After leaving College, Drew Carey traveled a bit, but suicidal tendencies got the better of him, and he attempted to take his life once again. He survived.

Realizing that his depression was getting out of control, Drew Carey enlisted in the U.S. Marine Corps in 1980 to gain some confidence. He served there for about six years.  During this period he started performing stand-up comedy.

The experience he had there was a big boost in his confidence, and his depression slowly faded away.

After returning from the service, Drew Carey started doing comedy gigs. He won the Cleveland Comedy Club Competition, and also made an appearance on the Talent Show Star Search. Trying to make his mark, his big break came in 1991, when he appeared on the Tonight Show. The audience praised his performance, and Carey spotted an opportunity for a bright career on television. In 1995, ABC signed him for a sitcom, titled, The Drew Carey Show. The show was top-rated among the American audience and brought him much fame.

Drew Carey also hosted the American version of the British hit, Whose line is it anyway and later replaced Bob Barker as the host of the show The Price is Right.In 2002, he was chosen to be the White House Correspondents Dinner Host.

Drew Carey can also be found doing photography. He particularly likes to take sports pictures. In 1997, he wrote his autobiography, Dirty Jokes, and Beer: Stories of the Unrefined. The book brought Carey into a new light in front of his audience which was much relished by them.

Drew Carey appeared on Who Wants to be a Millionaire in May 2000 and won $500, 000. He donated this money to the Ohio Library Foundation. He has also made donations up to a $100,000 to non-profit organizations.

Drew Carey has received many awards and honors in his career. Some notable mentions include the 1995 Hottest New Faces of TV award and being an inductee into the WWE Hall of Fame. He was also listed on Comedy Central’s 100 Greatest Stand-Ups of All Time.

Drew Carey became engaged to his girlfriend Nicole Jaracz in 2007. Five years later, they broke off the engagement. He is very close to Nicole’s son Connor and is like a father to him.