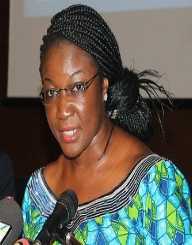 Akua Dansua was born on April 23, 1958. She is a Ghanaian journalist and politician. She was a member of parliament for more than a decade. She has held posts such as the Minister of Women and Children’s Affairs, Minister of Tourism, Minister of Youth and Sports and Ghana’s Ambassador to Germany.

Akua Dansua was born on April 23, 1958, at Hohoe, Ghana. She attended Kadjebi-Khan Local Authority Experimental Primary and Middle School for her primary education. She obtained her secondary education from Mawuli School at Ho, the capital of the Volta Region. She went ahead to complete her journalism studies at the Ghana Institute of Journalism in Accra. In 1979, she became an Electoral Assistant at the Electoral Commission of Ghana.

Akua Dansua served as the Chief Reporter of the Nigerian Reporter Newspaper from 1983 to 1987. In 1990, she completed her postgraduate studies at the University of Ghana at Legon. She obtained a Master’s Degree in Governance and Leadership from the Ghana Institute of Management and Public Administration.

Akua Dansua worked as a journalist with the ‘Weekly Spectator’ newspaper in Accra. She became the Features Editor of the newspaper until she joined politics. She entered politics when she became a member of the National Democratic Congress. In 1997, she was made a District Chief Executive in Kpando District, a post that she held up to 2000. In 2001, she was elected as Member of Parliament from the North Dayi constituency. In 2002, she served as an election observer for ECOWAS in Sierra Leone.

In 2006, Akua Dansua served the same post for the Commonwealth in the Gambia. In 2009, she became the Minister for Women and Children’s Affairs. In 2010, she was appointed the Minister for Youth and Sports, a post she held up to 2011. In 2011, she was appointed Minister of Tourism. She has also served as technical advisor to the National Council on Women and Development. She was also a media consultant to the United National Development Program. She was the first chair lady of the West Africa Media Network.

Akua Dansua also served as the Vice President of the Association of Women in the Media. She also serves as an advocate for Gender and Development Initiatives Ghana. She serves on the board of Africa in Democracy and Good Governance. She is currently Ghana’s Ambassador to Germany.

In 1991, Akua Dansua was awarded the Dag Hammarskjold fellow by the United Nations Correspondents Association to the most promising journalist from Africa.

Akua Dansua is currently divorced, and she has three children. She loves listening to music, browsing the internet, reading and holding discussions. She is a role model to many young girls who want to be just like her. She is a Children’s rights, gender and HIV/AIDS activist. She loves what she does, and her development of women in Ghana is also recognised. She was once recognized for her efforts to develop women in Ghana by the Women’s Law and Human Rights Institute of the Art Foundation.