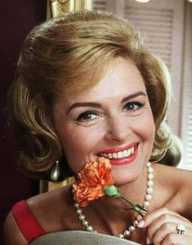 Donna Jeanette D’Errico is a blond American model and actress, who is famous for her film and television series and youthful looks.

Donna Jeanette D’Errico was born on March 30, 1968, in the southern state of Alabama, USA. The Italian American actress went to Pacelli High School in Columbus, Georgia. A bright student in mathematics, D’Errico dreamed of becoming an accountant. After her graduating from college in 1986, she moved to Los Angeles. The relocation also changed her dream of becoming an accountant.

With a curvy body of 34-22-34 and excellent looks, Donna D’Errico was quickly sported by modeling scouts in California. She had a brief modeling career and later worked for a limousine leasing company. After nine years of domestic modeling, she was covered in the Playboy magazine in September 1995.

The exposure brought in contracts from film and television directors. D’Errico chose to go for Baywatch. In this television series, she played the role of Donna Marco. The show lasted for two seasons, from 1996 to 1998. D’Errico then went into private business as she continued in her acting career. She was a television host in Battlebots and had a famous spa in Los Angeles.

Her apparent success in Baywatch opened her rise in Hollywood. She was given roles in several films. During her film acting period, she managed to interact with other personalities like Jennifer Tilly and Elizabeth McGovern. The 2007 film Intervention won an award in the San Diego Film Festival. Other films that she cast in are the 1999 film Candyman: Day of the Dead, and the 2008 film Inconceivable.

Donna D’Errico still does some work in the industry. She is still active in television and film industry. Her roles are diverse. She continues to feature in cameos and other movies. Her notable part in the recent past is the appearance in the film Austin Powers: Goldmember. D’Errico has other numerous television shows to her name. Some of them are High Tide and Men in White. She also has a documentary about her trip to climb Mount Ararat in Turkey. Since her entry in the film industry, D’Errico has featured in over 24 films and television series.

The Baywatch series made her a global figure. It won and still has the Guinness World Record for the most watched television series in the world. It had 18 episodes on its own, and its predecessor Baywatch Nights had 34, totaling 54 episodes.

Donna D’Errico got married to Nikki Sixx, the American rock musician, and producer in 1996. The high profile marriage was not without its share of troubles. After a brief separation, the two came back to live together. Eventually, they divorced in 2007. They had two children. Frankie Jean, who was born in 2001, was their biological daughter. And Rhyan, who was born in 1993, was D’Errico’s child from a previous relationship.

D’Errico, who is said to have been in constant battle with drug abuse, is a devout Roman Catholic. With her drug issues behind her now, D’Errico has put her efforts into raising her family in the most ethical way she can. One of the ways is praying with them every day.

She is also a lover of adventure. She once went on a venture in 2012. The trip to Turkey was to climb Mount Ararat, the iconic Biblical site where Noah’s Ark landed after the floods.

She currently lives in Los Angeles with her children.

Donna Jeanette D’Errico has had an illustrious career both in and out of acting. Her little journey from Alabama to Los Angeles has not been easy though. Donna had tough choices along her life path.

The decision to leave her parents at a tender age of 20 years was one of them. She also had to drop her accountancy dream to pursue modeling. Another twist came when she was called to Hollywood. In all this, she remained focused on herself. Her goal of making the best out of every situation propelled her to excel.

As she continues to act in the industry at the age of 50, many young blonds who think that looks are everything should emulate from her hard work and persistence.