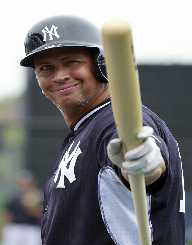 Alexander Emmanuel Rodriguez was born on July 27th, in 1975. He is a professional baseball player famously recognized as “A-Rod.” He made his debut appearance in the Major League Baseball while he was only 18 years old. His all-around abilities contributed to his success in the field taking home three Most Valuable Player awards. Part of his career was also engulfed with controversies as he was involved in drugs. This led to his suspension for the entire season in 2014. His final baseball game was in 2016.

Alex Rodriguez was born on July 27th, 1975. His place of birth was in New York City in Washington Heights section. His parents were Victor Rodriguez, his father, and Lourdes Navarro, his mother. His family had a shoe store business and that the family lived in the store after a closure of business hours. When Rodriguez was four years, his family migrated to the Dominican Republic before later moving to Miami, Florida. Soon, Rodriguez began playing his favorite game of all time, baseball. While growing up, he admired baseball players with the likes of Dale Murphy, Cal Ripken Jr, and Keith Hernandez. His dream team during his young years was the New York Mets.

His parents later divorced, and Victor left for the New York City. His mother was left responsible for raising their three children including Rodriguez.

While in schooling at Westminster Christian School, his football and baseball skills were evident as Alex Rodriguez performed well in both fields. Baseball was, however, his major area of specialization. He chose to focus fully on baseball while in his senior year.

At first, Rodriguez had made up his mind to join the University of Miami. Nonetheless, this changed after the Seattle Mariners drafted him. This was a one-time contract for him to venture into the Major League Baseball. He never took the university scholarship offered to him. Instead, he went for the deal to go pro and signed a $1.3 million contract for three years.

Alex Rodriguez had a huge impact on the Major League after debuting in 1994. During this period, he was about to celebrate his 19th birthday. In his first year, he went on to log 54 at-bats. But, this improved in the following year with 142at-bats. With time, he got used to the Major League gameplay, and he was certainly a sure deal for the team. In 1996, Rodriguez batted .358, knocked in 123 runners and made 36 home runs which made him finish second placed for Most Valuable Player title. The coming years would bring a difference in the Major League as Rodriguez demonstrated his prowess in the field by setting colorful records.

His recognition in the league made him a highly demanded player by several clubs including Texas Rangers. In 2001, Texas Rangers offered him a record-breaking deal of $252 million a contract that would last for ten years. He was worth the price as Rodriguez bagged home the MVP award in 2003 while playing for Texas Rangers. Unfortunately, the team did not perform as he had expected. After this season, the club sold him to

While playing for the Yankees, he went on to break records and rising the heights in his baseball career. He went on to take home the MVP award in 2005. Alex Rodriguez had hit .321 combining this with successful 48 home runs. In 2007, he topped the Major League having recorded 54 homers, 143 runs, and 156 RBIs. This meant that he would be the Most Valuable Player again that year.

Still in the same year, when August approached, Rodriguez managed to defeat Kyle Davies playing for Kansas City Royals in reaching his homer record. He had hit 500 homers at the age of 32. This, therefore, made him the youngest player to achieve such.

Shortly before the 2009 season kicked off, the young star received numerous criticisms both from his fans and his teammates. Alex Rodriguez had admitted that he used steroids. This raised eyebrows on his exceptional performance while in the field.

His personal life was also faced with some controversies. Rumor was that Rodriguez was cheating on his wife, Cynthia Scurtis. This led to a separation. He had previously romantically indulged with Madonna. After his marriage came to an end, he went ahead and dated Cameron Diaz.

With controversies surrounding him including doping issues in 2010 to 2013, this led to his suspension for 211 games. This meant that he would not be playing for the entire 2014 season. Rodriguez, however, returned to play for the Yankees in 2015. He managed to perform well in this season but got sluggish in 2016. The team also had preferences for younger players, and soon, he released a press conference announcing his career termination after playing his last game on August 12thin 2016.

His earlier marriage to Cynthia Scurtis began in 2002 and ended in 2008 after infidelity came in between. This couple had two children together, Natasha and Ella. After divorcing his wife,  Alex Rodriguez has dated other women including Cameron Diaz, Kate Hudson, Anne Wojcicki and Torrie Wilson.