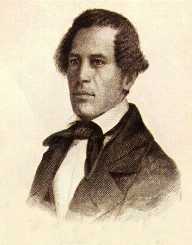 William Wells Brown was an African-American author, historian, and lecturer.

William was born into slavery near the city of Lexington, Kentucky. His exact birth date is not known. He was born either sometime in 1814 or on March 15, 1815. His mother, Elizabeth, was a slave. His father, George W. Higgins, was a plantation owner. William was bought and sold several times. He mostly worked on steamboats in St. Louis. In 1833, he tried to escape slavery with his mother, but they were captured. He finally managed to escape in 1834.

William took the names Wells and Brown from the man who helped him escape. He taught himself how to read and write. He moved to Buffalo, New York, where he continued to work on steamboats. He joined the Negro Convention Movement and the Temperance Society. He helped many other slaves escape to freedom. In 1847, he released his first memoir, called Narrative of William W. Brown, a Fugitive Slave, Written by Himself.

In 1849, Brown moved to Europe. He traveled around the United Kingdom and gave lectures against slavery. He also took part in the International Peace Congress in Paris as a representative of the U. S. He wrote about his travels in his work Three Years in Europe: Places I Have Seen and People I Have Met. In 1853, he published the novel Clotel: The President’s Daughter. It was the first novel ever written by an African American. It told the story of the children that President Thomas Jefferson had with one of his slaves.

In 1854, Brown’s freedom was purchased by the Richardson family from England. After that, he returned to the United States. He regularly gave lectures against slavery around the country. In 1858, he published his first play, called The Escape: A Leap for Freedom. He also wrote another play, Experience: How to Give a Northern Man a Backbone, but he never published it. He wrote the history The Rising Son: The Antecedents and Advancements of the Colored Race, as well as The Black Man: His Antecedents, His Genius, and His Achievements. He also wrote The Negro in the American Rebellion: His Heroism and His Fidelity, talking about the black soldiers in the Civil War. In 1880, he wrote his final memoir, called My Southern Home: The South and Its People.

In 1834, Brown married a woman named Elizabeth Schooner. They had two daughters, named Josephine and Clarissa. He and his wife eventually started living apart. She passed away in 1851. In 1856, his daughter Josephine published his biography, titled Biography of an American Bondman. In 1860, he married Anna Elizabeth Gray.

Brown opened up his own medical practice for homeopathic medicine in Boston. He spent his later years working there. He passed away in Chelsea, Massachusetts, on November 6, 1884.

Brown was inducted into the Kentucky Writers Hall of Fame. There is a school in Lexington named after him. There is a historic marker near the location of his home in Buffalo.