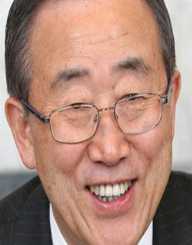 Ban Ki-moon was born in Haengchi a small village in Wonnam Township on 13th June 1944. His father was a businessman; he owned a warehouse but later fell into bankruptcy.

The family was forced to flee to a remote mountainside to escape the Korean War. His family returned to their hometown after the war. During the war, Ban met the American soldiers, and he learnt the English language.

Ban Ki-moon went to Chungju High School where he was famous for his understanding of the English language. Ban won several English contests during his high school. He later earned a trip to the United States in for few months in 1962.

He was hosted by a family in San Francisco for several months. During his visit to the U.S., he met the U.S. President. Ban disclosed to one journalist that he wanted to be a diplomat.

In 1970, Ban attended Seoul National University where he did a degree in International Relations. He later did his master's in Public Administration in John Kennedy School of Government.

Apart from his native language, Ban Ki-moon also speaks French and English. His English was, however, not as fluent as expected.

During his tours Ban found it challenging to win over English speaking audience. The extent of his French understanding has never been clear.

After his graduation from the University, Ban Ki-moon worked for the South Korean Ministry of Foreign Affairs during the years of Yusin Constitution. His excellent work saw him ascend in the ministry. His competence attracted a lot of admiration from his superiors. His first overseas assignment was to New Delhi, India.

Ban became the first Secretary of the South Permanent Observer Mission in 1974. He assumed the seat of Director of United Nations Division after the assassination of the former holder of the position.

After an upward trend in his career, he was appointed as Ambassador of Slovenia in 1998 and the next year elected as Comprehensive Nuclear-Test-Ban Treaty Organization chairman.

During his time as Ambassador of Austria, Ban Ki-moon included a positive statement on Anti-Ballistic Missile Treaty yet the United States Government had abandoned the treaty.

The blunder caused Ban his ambassadorial job. The then president of South Korea fired him to avoid any diplomatic wars with the U.S.

His unemployment, however, came as a blessing in disguise since Ban was appointed as the Chief of Staff to president Han Seung-soo's general assembly. The incoming president later appointed him as the foreign policy advisor.

Ban Ki-moon was appointed South Korea Foreign Minister in 2004 by President Roh Moo-hyun. During his term, he led a negotiation to solve a diplomatic war with North Korea on the nuclear issue.

Ban Ki-moon was elected to the U.N as the secretary general in 2007. His first challenge was to deal with the nuclear threat posed by Iran. He appointed Asha-Rose Migiro, Tanzania foreign Minister as his assistant and later formed his cabinet.

His administrative skills during his term in the United Nations earned him the title the bureaucrat.

Ban Ki-moon married his long-term girlfriend, Yoo Soon-Taek in 1971. The couple has three children together.