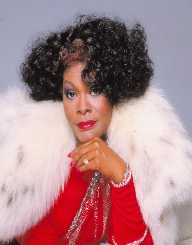 Marie Dionne Warwick was born on December 12, 1940, in East Orange, New Jersey, USA. She is best known by her stage name, Dionne Warwick.

Dionne Warwick graduated from high school in 1959. After this, she went on to attend the Hartt College of Music. It was while at this school that she met Burt Bacharach. It was because of her friendship with him that she was able to create the demo tape that landed her a record deal with Scepter Records.

Throughout the 1960’s, Dionne Warwick’s fame grew like crazy. She went from being basically a nobody to topping the charts and having Gold Certified records. Warwick’s third album, Make Way for Dionne Warwick, released in 1964, was the first of her albums to reach the top 10 slot in the US R&B charts. Soon, in 1966, her album Here Where There is Love, reached #1 on the US R&B charts and was the first of her albums to be certified as Gold. Some of her other popular albums from this decade include Dionne Warwick in the Valley of the Dolls, The Windows of the World, and Soulful.

From 1970, Dionne Warwick released her last two albums with Scepter Records: I’ll Never Fall in Love Again and Very Dionne. In 1972, Warwick released her first album with Warner Bros. Records called Dionne. She would go on to work with Warner Bros. Records until 1977, releasing five albums with the company, including Then You Came and Track of the Cat. In 1979, she switched record companies again, this time working with Arista Records. Her first record with this company, Dionne, was the first of her records to go Platinum in the United States.

Dionne Warwick continued to work with Arista Records all throughout the 1980’s. This was arguably her most productive and prosperous time as an artist. Her 1982 album, Heartbreaker, went Platinum in the UK and Gold in the US. Another album, Friends, also went Gold in both the US and Canada. Some of her other popular records from this decade include Friends in Love, Finder of Lost Loves, and No Night So Long.

Dionne Warwick continued to produce her albums with Arista Records until 1994. None of her albums of the 1990’s were nearly as famous as her albums from the decade before. Some of her records with Arista from this decade include Dionne Warwick Sings Cole Porter and Friends Can Be Lovers. In 1998, she released her first album with River North Records, Dionne Sings Dionne.

In the 2000’s, Dionne Warwick worked with a new record label with almost every new album. She worked with record labels like Concord and Rhino. Just like in the 1990’s, her newer albums became less and less popular as time went on. Some of her albums from this decade include My Favorite Time of the Year and Why We Sing.

In the 2010’s, Dionne Warwick continued to work with new recording companies for each of her albums. Her albums from this decade so far include Only Trust Your Heart (RED Distribution), Now (H&I Music), and Feels so Good (Bright Music). The most recent of these albums were released in 2014.

Dionne Warwick’s acting career began in 1969, although she had been on talk shows and recorded concerts before this. She debuted in the film Slaves. In the 1970’s, Warwick did not work on any more films, but instead worked in bit parts in television shows, including The Rockford Files and Switch.

In the 1980’s, Dionne Warwick only appeared in two acting projects: the show The Fall Guy and the film Rent-a-Cop.

Dionne Warwick’s acting career picked up in the 1990’s. She continued to work mostly in bit roles on television shows, but she also appeared in an uncredited role in the film Men in Black. Some of the television shows she appeared on (either as a live actress or as a voice actress) include Captain Planet and the Planeteers, The Wayans Bros., and So Weird.

In the 2000’s, she has only appeared in one episode of Walker, Texas Ranger. Another project of hers, Armed, is expected to be released in 2018.

Most of Dionne Warwick’s awards and accomplishments are due to her music career. Some of her most impressive awards are listed below.

Grammy Award for Best Female Pop Vocal Performance (“Do You Know the Way to San Jose” and “I’ll Never Love This Way Again”)
Memphis Music Award for Outstanding Female Vocalist - 1971
People’s Choice Award Favorite Female Singer - 1975
National Music Foundation Cultural Impact Award - 1998
Dionne Warwick has Lifetime Achievement awards from the ASCAP Awards, the Rhythm and Blues Foundation, and the Women’s World Awards.
Three of Warwick’s songs (“Alfie,” “Don’t Make Me Over,” and “Walk on By”) are in the Grammy Hall of Fame.

Dionne Warwick is involved with several charities around the world. She does her part by using her musical talents to raise money. Some of the charities she has performed for include The Hunger Project and the American Foundation of AIDS Research. Some of the other charities she works with or donates to include the Elton John AIDS Foundation, Hear the World, and the Starlight Children’s Foundation.

Beginning in the late 1980’s leading into the 1990’s, Dionne Warwick began having financial problems, spending more money than she could earn. Around this same time, she also had a lien placed on her for unpaid taxes. These early money problems would go on to haunt her for decades. Later, in 2013, she officially declared bankruptcy, as she owed the government more than $10 million in unpaid taxes, as well as having other debts.

Dionne Warwick married William Elliott in 1966. This couple had two sons together: Damon and David. However, this couple later divorced in 1975.