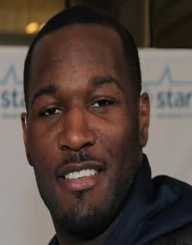 Derrick Coleman is the third deaf player to play in the American Football National League. His exemplary performance on the field has proved that sound is not a barrier in football.

Derrick Coleman was born as Derrick Lamont Coleman Jr. in Los Angeles on October 18, 1990. He is the son of Derrick Coleman Sr. and his wife May Evans. His parents became the pillars of his growth. He got his strength and high self-esteem from them. In 1993, the doctors diagnosed a hearing defect on his left ear. The doctors said he was gradually going deaf. Coleman had a defective gene that slowed his hearing. His parents did not have a hearing impairment. Coleman became a victim to a genetic disorder. His parents found it had to believe the situation. He started using hearing aids in his childhood. He became a target of bullying from older children in school. Coleman became involved in sports, particularly American football.

He resolved to play the game when he joined the 7th grade. He got encouraged to play by his father. His mother became skeptical about his abilities with a defective hearing capability. He proved his parent right for believing his talent. Coleman rapidly became the favorite rising star for the school team.

After the elementary school, Coleman joined at the Troy High School in California. He surprised his teammates with his sporting abilities. He won the Most Valuable Player Trophy in his last year in high school. He became the most prolific player on the team. He set high school records during his playing time. The sports channel ESPN ranked him as the second-best fullback player in the US.  After graduating from Troy, Coleman enrolled for a degree at UCLA. He graduated with a Political Science degree.

As a college football player, Coleman wore a protective headgear to protect his ears. Since football is a regular contact game, he got permission to have protective gear for his head. He won three consecutive Tommy Prothro Awards for his performance on the field. Coleman won the Paul Wellman Memorial Award for being the best All Round Player in his last year.

After a successful stint in high school, Coleman became stranded upon graduation in 2012. He was left out of the draft selection. He joined the league through Minnesota Vikings signing as a free agent. In December 2012, Coleman signed to play for the Seattle Seahawks. He became the third legally deaf player to enlist in the National Football League. The first two were Bonnie Sloan and Kenny Walker who signed in 1973 and 1991 respectively.

Coleman made his maiden touchdown against the New Orleans Saints. He played in the Seahawks team during the Super Bowl XLVII championship final. On March 21, 2017, he moved to the Atlanta Falcons. He played in several games before getting his breakthrough. In September 2017, Coleman celebrated his first victory against the Chicago Bears. He left the Falcons in May 2018 to join the Arizona Cardinals.

Coleman is a reserved person by nature. He is self-motivated to prove the world wrong for the stereotypes the handicapped are profiled in. He is a strong believer in the Christian faith which keeps him motivated in life. He strives to help in philanthropic activities whenever possible.

In 2014, he inspired the American community in a television commercial for Duracell Batteries. He became the icon of overcoming personal limitations in life. Coleman got correspondence from all over the country encouraging him on his journey. He particularly cherished the letter from twin siblings Riley and Erin Kovalcik. They encouraged him to brave the situation as they also suffered from the same hearing defect. Derrick invited them to the Super Bowl in 2014. Duracell catered for all their expenses.

In October 2015, Coleman had an accident in Bellevue, Washington. He knocked a car from behind and injured the driver. Kristopher Fine, the 56-year-old driver narrated how Coleman walked away after causing the accident. The police apprehended him and alleged he smoked marijuana an hour earlier.

Derrick Coleman is an example of resilience. He fought the difficult childhood to win over the admiration of the stereotypes who profiled him in the negative. He got the support of his parent through his childhood and soldiered in life.

In his early school life, he carried numerous nicknames. Older bullies and his peers called him antennae ears or four years due to the bulky hearing aids. He chose football since he wanted to play without being sidelined. He set his sights on the field and broke the sound barrier.

He inspired other children with physical disabilities to rise above the stereotypes and avoid excuses. Coleman proved wrong the parents who shun away from giving disabled children a chance to lead a normal life.