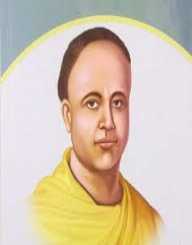 Social reformer, educationist and writer Ishwar Chandra Vidyasagar was born on the 26 September 1820 in the village of Ghatal in the District Medinipur of Bengal. His parents were of modest means and were both religious people. They were Thakurdas Bandyopadhyay and Bhagavati Devi. He was a gifted child who was taught Sanskrit at the local Pathshala and in 1826 his father took him to Calcutta to further his education.

In June 1829, Ishwar Chandra Vidyasagar was enrolled at the Sanskrit College in Calcutta. He was an exceptional student, and it was here that he was given the name of Vidyasagar in 1839.
His studies included astronomy, Hindu and English law, literature, grammar, rhetoric, logic, and Vedanta. He obtained certificates in all subjects when he left Sanskrit College in December 1941.

Ishwar Chandra Vidyasagar's first job was teaching at Fort William College in Bangla then in April 1846; he was offered a job as an Assistant Secretary at Sanskrit College. He attempted to improve the syllabus but was not successful, and in July 1947 he resigned. He later rejoined Sanskrit College as a professor of Sanskrit Literature. Then in 1851, he was appointed the principal of the college.

As principal of the college, he instituted a series of reforms including opening enrolment to all Hindus and introducing nominal fees. He was responsible for the government agreeing to allow Sanskrit College graduates to apply for deputy magistrate posts.

Reforms Ishwar Chandra Vidyasagar introduced included the teaching of mathematics and grammar in Bangla and English as well as Sanskrit. He made English a compulsory subject and also promoted the teaching of Bangla as part of his syllabus reform.

In addition to his role as principal of the College, he also served as the assistant inspector of schools from 1855. During this time he founded twenty schools in the Bangla districts of Nadia, Bardhaman, Hugli, and Medinipur. He also founded a teachers training college. One of his initiatives was establishing schools for girls.

Another initiative was Calcutta Metropolitan Institute which was established in 1859 as an English training school for the children of wealthy Hindu parents. He took over running of the school in 1861. It was renamed the Hindu Metropolitan Institution in 1864 and began to concentrate on preparing pupils for entrance examinations. In 1872 the school was accepted by Calcutta University as an intermediate college and by 1879, a degree college.

Ishwar Chandra Vidyasagar campaigned on behalf of child widows starting in 1842 which an article in the Bengal Spectator. He went on to write extensively on the subject. In July 1857 the government passed a law legalising widow remarriage.

He was also firmly in favour of equal educational opportunities for girls and boys.

Ishwar Chandra Vidyasagar's wife was Dinamani Devi. They had one child, a son Narayan Chandra Bandyopadhyay

He died on the 29 July 1891 at the age of seventy. His home in Kolkata was later purchased by the Bengali Association.