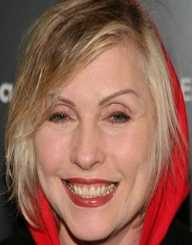 Angela Trimble was born 1st July 1945, in Miami, Florida, in the United States. Richard and Catherine Harry adopted Trimble when she was a baby. They changed her name to Deborah Ann Harry. The Harry's owned a gift shop in New Jersey.

Around 1968, Debbie Harry moved to New York City. She had various jobs including secretary, go-go dancer, and even a Playboy bunny.

Harry's first venture into music was as a backup singer for a group called The Wind in the Willows, who performed in the folk-rock genre. They released their first album in 1968.

She performed with another group in 1974, and it was then that she met Chris Stein.

Debbie Harry and Stein started another group which didn't last long, but they then formed Blondie, and commercial success quickly followed. Their first album, Blondie, was released in 1976.

With her distinctive blonde hair and sultry pout, Blondie's success grew. Their third album, Parallel Lines, was released in 1978 and became a resounding success all over the world. Their biggest single, Heart of Glass, was off the album.

The group had number one hits including, Call Me, and The Tide Is High in 1980.

While at the peak of their fame, world-renowned artist, Andy Warhol, painted several works of Debbie Harry in 1980. The two remained friends through the years.

In 1981, the group took a break and stepped out of the limelight. They re-formed 12 months later, but the album they released didn't do well in the charts, and they also finished their worldwide tour early as tickets weren't selling.

During this period, Stein became very ill with a disease of the autoimmune system, and the band decided to go their separate ways.

Once Blondie had finished, Debbie Harry continued with a solo career. She released five albums, the first was in 1981.

She then concentrated over the next few years on looking after Stein, who was her partner.

Her other studio albums were released in 1986, 1989, 1993, and 2007. Harry also released five compilation albums. Although four of her albums went gold, she never knew the success that Blondie had.

Throughout her solo years, Debbie Harry also toured extensively. In addition to her shows, she also supported acts like INXS, and she performed with Cyndi Lauper on her world tour as part of her Human Rights Campaign.

After 15 years, Blondie re-formed in 1997 and went back into the studio to record. Their album was released in 1999, and the first single from the album, Maria, went straight to the top of the charts in 15 countries around the world.

Blondie toured nearly every year and continued to released albums over the next few years.

As well as her solo career and her career with Blondie, Debbie Harry has collaborated with many other artists over the years, and she has recorded with them as well. These include Die Haut, Elvis Costello, Nick Cave, and Talking Heads, to name just a few.

Harry was also a prolific actress, appearing in more than 40 movies, and 15 television shows.

Debbie Harry and Stein were life partners for many years, breaking up in 1989, but continuing to work together in the band.

Inspired by the tireless work Elton John does for AIDS, Harry has committed herself to charities that involve endometriosis and cancer.