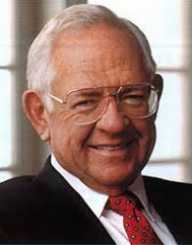 Wendy’s hamburger chain, founder television personality, author and social activist Dave Thomas was born Rex David Thomas on the 2 July 1932 in Atlantic City, New Jersey. He was adopted by a couple from Kalamazoo, Michigan as an infant and never knew his biological mother. When Thomas was five, he adoptive mother, Auleva Thomas, died of rheumatic fever. He subsequently lost two stepmothers while still a boy. He was close to paternal grandmother Minnie Sinclair and used to spend his summer holidays with her in Maine.

Dave Thomas worked in the U.S. Army as the manager of a club before returning to Fort Wayne. A former boss owned some of the first franchises for Kentucky Fried Chicken and encouraged him to buy into the franchises. Thomas took the advice and in 1968, sold the restaurants for over a million and a half US dollars. He then worked as a regional director for Kentucky Fried Chicken before he co-founded the Arthur Treacher’s Fish and Chips chain.

Dave Thomas' first  Wendy’s restaurant was in Columbus, Ohio which he opened in 1969. He named the business after his daughter Melina whose nickname was Wendy. Thomas’ initial ambition was to run a successful restaurant that would employ his children, but in less than ten years there were 1,000 restaurants in the chain. His company, Wendy’s International, bought out Tim Hortons, a Canadian company in 1995.

Wendy’s International grew until it consisted of thousands of outlets in the United States as well as internationally. The traditional square shape of Wendy’s hamburgers is a nod at his grandmother’s advice to never cut corners. A series of advertisements featuring Thomas began airing in 1989 and were so successful that a survey company reported that 70 percent of Americans could name Thomas as Wendy’s founder.

Dave Thomas was an adoptee and later in life became a supporter of adoption awareness and adoption. All the profits from his books Dave’s Way and Well Done went to his foundation the Dave Thomas Foundation for Adoption. He was active in promoting the importance of adoption and appeared before Congress to speak out about the importance of motivating people to adopt foster children.

Dave Thomas was named national spokesman on adoption issues by President George Bush. In 1996, when President Clinton signed a bill to give adoptive parents a tax credit, he acknowledged Thomas’ input and leadership on the issue of adoption.

In 1966, Dave Thomas underwent quadruple heart bypass surgery. Then in 2001, he began to require ongoing kidney dialysis and was also diagnosed with liver cancer.

Dave Thomas had five children with his wife Lorraine, four daughters: Melinda, Pam, Molly and Lori and a son Ken. Dave Thomas died in 2002 from complications from liver cancer. He was 69 years old.