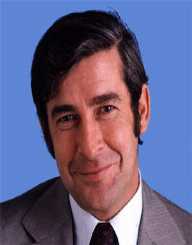 Dave Allen was an Irish comedian, TV host, and actor.

David Tynan O’Mahony was born on July 6, 1936, in the suburb of Firhouse, Dublin, Ireland. His father, Gerard, was the editor of The Irish Times. His mother’s name was Jean Archer. He had two older brothers, named John and Peter. He studied at Terenure College, Newbridge College, and the Catholic University School. He moved to London at the age of 19 and he worked many different jobs.

In London, he decided to take the stage name “Dave Allen”. He got a job as an entertainer at the Butlins holiday camp in the town of Skegness. He then spent the next few years performing stand-up comedy in strip clubs, nightclubs, and theatres. In 1959, he appeared on New Faces, a talent show that aired on BBC. He then started hosting a music show, during which he joined musicians on their tours. He worked with stars such as Helen Shapiro, Adam Faith, and Sophie Tucker. In 1963, he moved to Australia. There, he appeared on TV with the actor Digby Wolfe. He then started his own show on Channel 9, called Tonight with Dave Allen.

In 1964, Allen came back to England. He appeared on a number of shows, such as Sunday Night at the London Palladium, The Val Doonican Show, and The Blackpool Show. He briefly hosted Tonight with Dave Allen on ATV. He then hosted The Dave Allen Show and Dave Allen at Large on BBC. From 1975 to 1977, he resumed his work on The Dave Allen Show in Australia. During his shows, he usually sat on a chair and told jokes. He also occasionally created sketches. One of the most common topics of his comedy was religions. Some of his jokes raised some controversy.

Apart from comedy, Allen also acted in several plays. He appeared in A Pagan Place, Peter Pan, and One Fine Day. He was also the commentator in several documentaries. They included Dave Allen in the Melting Pot, Dave Allen in Search of the Great English Eccentric, and Eccentrics at Play.

Allen married Judith Stott, an actress, in 1964. They had a daughter named Jane and a son named Edward. They got a divorce in 1983. In 1986, he started dating Karin Stark. They got married in 2003. Their son, Cullen, was born a few weeks after Allen’s death.

In 1996, Allen received a lifetime achievement award from the British Comedy Awards. In 2018, he was played by actor Aidan Gillen in the biographical special Dave Allen at Peace. The program aired on BBC Two and on RTE One.