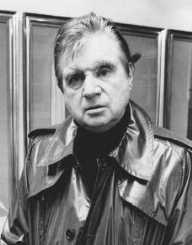 The painter Frances Bacon was born in Dublin, Ireland on the 28 October 1909 to English parents. His Australian-born father, Anthony Edward Mortimer Bacon was a retired British Army Major beginning a new career as a horse trainer and breeder in Ireland.

The Bacon family ancestry included the Elizabethan philosopher Francis Bacon. His mother was Christina Winifred Loxley Firth, whose Sheffield family had made a fortune in the steel industry. Bacon was one of five children, with two brothers and two sisters. Their first home in Ireland was Cannycourt House in County Kildare.

Then during World War I (1914-1918), they relocated to London where Bacon, Snr. Worked in the British War Office. They returned to Ireland at the end of the war where things were politically uncertain.

The Easter Uprising occurred in 1916, the War of Independence (1919-1921) and the Civil War (1922-`1923). The Bacon family lived in various country houses in County Laois and County Kildare while also spending time in England.

Because the family moved around a lot, Frances Bacon was homeschooled and only spent two years in formal education when he enrolled as a boarder at the Dean Close School, Cheltenham, England (1924-1926).

Frances Bacon was thrown out of the home in 1926 when his father caught him wearing his mother’s clothing. At sixteen he went to London, living off a small weekly allowance his mother gave him. He lived by his wits doing odd jobs and experimenting in relationships with older men.

He went to Berlin in 1927 spending a few months in Berlin and Paris where he went to various galleries and art exhibitions including an exhibition of drawings by Picasso at the Galerie Paul Rosenberg. Returning to London, he set up a studio in South Kensington and worked as an interior decorator and furniture designer.

In late 1930, he was featured in The Studio magazine with his designs shown as the 1930 Look in British Decoration. He sold a few pieces, mainly to friends including Cubist painter Roy de Maistre who was a friend. In November 1930, Bacon exhibited with de Maistre and portraitist Jean Shepeard.

One of his patrons was a wealthy businessman Eric Hall. His first original painting was Crucifixion, 1933 and brought him to public notice when he exhibited at the Mayor Gallery in April 1933.

The painting was also reproduced in Art Now and subsequently purchased by Sir Michael Sadler, an art collector. His career as a painter then went through a shaky stage with unfavorable reviews of his one-person show at the Transition Gallery in February 1934.

He was knocked back by the International Surrealist Exhibition in London. He destroyed many paintings from this period.

Frances Bacon was exempt from active war service because of his asthmatic condition. He was a Civil Defence volunteer but had to cease because his asthma intensified. During the war years in lived in a cottage in Petersfield in Hampshire with Hall.

In 1943 he moved to a ground floor flat a 7 Cromwell Place, South Kensington, London. Around this time he completed the painting that heralded his arrival as a significant British painter. The painting Three Studies for Figures at the Base of a Crucifixion, 1944 was shown at the Lefevre Gallery in April 1945.

Eric Hall purchased the painting and later donated it to the Tate Gallery. Work that followed included Painting, 1946. This work was acquired by the art dealer Erica Brausen and exhibited in the Musee d’Art Moderne in Paris in November 1946.

During the early 1950s, Frances Bacon visited South Africa. His mother had relocated there after the death of her husband. Two of his sisters, Ianthe and Winnie, had immigrated to Southern Rhodesia, modern-day Zimbabwe. Bacon had the opportunity to see African wildlife in their natural habitat, and this influenced his work

In 1952, he produced several paintings reflecting this including Study of a Figure in a Landscape. He also visited Cairo. He had a fascination with Egyptian art, and this was reflected in four paintings based on the Great Sphinx (1953-1954). In the mid-1950s he also proved the series Man in Blue I-VII, Two Figures (1953) and Two Figures in the Grass (1954).

He was influenced by Eadweard Muybridge’s The Human Figure in Motion (1901)  a photographic sequence of the body in action and Animals in Motion (1899). Bacon went on to become one of the most important painters of the twentieth century and one of Britain’s most acclaimed artists.

Frances Bacon was the first contemporary English artist to have a major exhibition at the Metropolitan Museum of Art in New York (1973). Retrospectives of his work were held at both the Tate Gallery and the Hirshhorn in his later years. In 2013, Bacon’s Three Studies of Lucian Freud set a new world record price for an art auction after selling for $142.4 million.

Frances Bacon was involved in a relationship with one of his partons Eric Hall for 15 years. Bacon moved several times over the years and was always accompanied by his ex-nanny Jessie Lightfoot who was a maternal figure for him.

He was in a long-term relationship with George Dyer, a young man from an East End crime family. Before meeting Bacon, Dyer had been jailed for theft on a few occasions. Dyer later became an alcoholic, and this led to problems in the relationship. Bacon was devastated when Dyer committed suicide in 1971

In the final years of his life, John Edwards was his companion and photographer. Bacon lived quietly, dying while on holiday in Madrid, Spain of a heart attack at the age of 81 on the 23 April 1992. John Edwards inherited his estate.

Edwards worked tirelessly promoting Bacon’s work until his death in 2003. He donated Bacon’s studio to the Hugh Lane Municipal Gallery of Modern Art in Dublin which is a permanent exhibition and research archive.