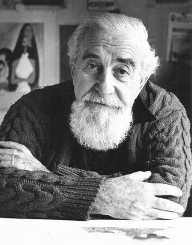 Al Hirschfeld was an American cartoon caricaturist known for depicting celebrity personalities in the American community.

Al Hirschfeld was born as Albert Hirschfeld on June 21, 1903, in St. Louis, Missouri. He relocated with his family to New York in 1914. He then enrolled to study art at the Art Students League. In 1920 at the age of 17, he got a job at the Selznick studios. He worked as the art director for four years.

In 1924 he moved to Europe and settled in Paris. Hirschfeld studied different European artistic styles. He blended the two influences with his own imaginations to create a unique style of caricatures on the American scene. He came back to the US and settled in New York.

Hirschfeld started his professional career in 1926. He drew a portrait that impressed a newspaper agent Richard Maney. Hirschfeld got a job to work for The New York Herald Tribune. He stayed at the publication for two years.

Hirschfeld started drawing for commercials published in the newspaper. He did advance promotional adverts for the Broadway theater group. Hirschfeld now doubled as cartoonist and promoter for the upcoming Broadway stage plays. He traveled to study the Oriental artistic styles in the 1930s. He studied the Japanese style and other aspects of Chinese influences on the oriental caricatures

On his return, he got illustration works for a number of books. He did cover and in pages, caricature works for several authors. Notable examples are the book Westward Ha! By S.J Perelman, and The Lively Years, written by author Brooks Atkinson. He got several commissions to do paintings for cover pages of known magazines like Life Magazine, Look Magazine, TV Guide and The New Masses.

As the years passed, Hirschfeld became an author. He wrote books and did his own caricature displays for the books. Some of the books he authored and caricatured are Show Business Is No Business in 1951, the 1968 book In The World of Hirschfeld, and lastly the 1979 publication Hirschfeld by Hirschfeld.

In his work, Hirschfeld used satirical caricatures to inform the public of his messages. He became the most viewed cartoonist in the US for his humor. Though he was not malicious, Hirschfeld once courted controversy. In 1963 he did a cartoon caricature of CBC television program host Allen Funt. Funt became extremely outraged by his depiction and threatened to quit the institution. The issue was resolved by the senior bosses within the organization. Most of his painting work, sculptures, and other illustrations are found on the walls of museums in the US.

Hirschfeld had a unique style in his cartoons. He drew his work mostly using a crow quill. He also used black ink to produce a black and white portrait. Most cartoonists who preferred colored illustrations.

After the birth of his only child Nina, Hirschfeld used her name as his signature on all his works. He penned the name in English or in Arabic numerical alphabets at the right corner of the paintings. Without knowing, Hirschfeld created a favorite pastime for American students. They relished in counting the number of times Hirschfeld hid the name Nina in a particular painting.

Hirschfeld married his first wife Florence Hobby and divorced her in 1943. He remarried actress Dolly Haas of the Broadway Theater group in 1943. He fathered his only child, a daughter named Nina. His second marriage ended in 1994 after his wife succumbed to ovarian cancer. Two years later in 1996, Hirschfeld married Louise Kerz. They stayed together until his death.

Al Hirschfeld breathed his last on January 20, 2003. He died a natural death in his Manhattan home. He was buried in New York.

The US Postal Service issued stamps that were drawn by Hirschfeld compete with his Nina signature. The Al Hirschfeld Theatre in New York is named after him. Two museums in New York galleries display his works.

His chair and work station desk is displayed at the New York Public Library for the Performing Arts. He has a Star at the St Louis Walk of Fame. In 2002 Hirschfeld received the National Medal of Arts. Hirschfeld joined the other few Americans as recipients of the prestigious Congressional honor.