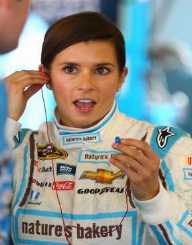 Danica Patrick is an American professional race car driver, an athlete, model and TV personality. Danica Patrick holds a tremendously successful career and is considered one of the top women in the racing capacity, specifically American open-wheel racing, with a lot of famous world breaking personal records.

Danica Patrick is very sensational and commands attention in the male-dominated sector of professional motorsports. Danica is the only woman to ever win an Indy car event, with the highest female finish in the same during the year 2005 to 2011.

Danica Patrick was born on March 25, 1982, in Beloit, Wisconsin. Her parents are Beverly Ann and Terry Jose Patrick junior who met on a blind date in the seventies. Danica's father is known to have raced snowmobiles, motocross, and midget cars.

Danica Patrick is the firstborn with a younger sibling called Brooke. Danica was raised in an area named Roscoe, located in Illinois, whereby the family owned and operated various businesses, for example, a plate glass company. While there, Danica attended Hononegah community high school in Rockton and was involved in part-time extra-curricular activities whereby she was a cheerleader. However, Danica Patrick dropped out shortly and attained a GED certification.

From her early years, Danica Patrick had identified racing as what she wanted to do, and at the age of 10, she began go-karting. With the help of her father, Danica moved to Milton Keynes at sixteen to pursue her racing dreams. During the three year spell in the region, Danica indeed sank deep roots in the racing sector, competing in the Formula Ford and Formula Vauxhall.Danica Patrick attained great success in the competition as she emerged second and set a new world record as the first American to ever finish in such a position.

In the year 1997, Danica Patrick meeting with John Mecom Jr. was quite an impact on her racing career as he helped her hand in hand since then, and organized her participation in the Formula Fords. In 2002, Danica became a Rahall letterman racing’s driver and made a couple of starts in the Barber dodge pro series. A bit later in 2003, she shifted to Toyota Atlantic championship, where Danica always finished top three but never won the race.

Danica Patrick competed in the Indianapolis 500 on May 29, 2005, setting a world record of becoming the fourth woman to do so and the highest pole position ever attained by a woman. The only woman to have come close to that was Janet Guthrie in 1977. During the practice session for the competition, Danica recorded the highest speed of the month but lost the pole position due to a minor error.

At Indianapolis, Danica Patrick led the race twice and became the first woman ever to do so. During the run, Danicamet with an accident but her crew was able to fix the damages quickly, and she got back on. On July 2, the same year, she participated at the Kansas Speedway and won her first pole position, becoming the second woman ever to do so.

Danica Patrick's career had kicked off and became reasonably stable, participating in various competitions. Danica summed up the year in spectacular fashion by earning Rookie of the year award from both Indiana polis 500 and 2005 Indy car series

In 2006, Danica Patrick encountered a setback when a teammate Paul Dana passed away tragically as they practiced while waiting for the Toyota Indy 300 competitions. However, Danica did pretty well for the rest of the year, bagging top ten solid spots during the IRL campaign, attaining a 9th overall position in the standings. Due to Danica Patrick's achievements, United States sports academy named her Female Athlete of the year.

To wrap up the entire year, Danica Patrick had 4 top 5, 11 in the top 10 and led 17 laps during the season. Additionally, she had best career achievements of 424 points and 7th position finish.

Danica Patrick's career grew year in year out and 2008, she completed the year’s IndyCar series season in 6th position, setting another American record as the highest among American drivers for the particular year. The next year, she improved even more, finishing at 5th place, the highest she has ever achieved until now. By this, she also set another record of being the most senior of the Andretti Green racing drivers, non-Penske, Gannasi drivers and American drivers for that season.

As stated earlier, Danica Patrick's career is often a record-breaking one due to her talent and uniqueness. In 2010, she finished every race of the season, setting a record for the Indy car series for Indy car series for consecutive races completed running. At that time, Danica also started a transition to the stock car racing, joining NASCAR Xfinity series. While there, she set yet another record. Danica became the first woman to finish in fourth place in NASCAR completion, during the Las Vegas motor speedway.

In the year 2013 Danica Patrick completed the first full season on NASCAR sprint cup circuit. At this Patrick emerged as the winner for the pole position, becoming the first woman to ever do so in a sprint cup race. During the same year, Patrick was also a Turner Scott Motorsports driver, mostly on a part-time basis during the nationwide series. The next year, she completed the season at the 28th spot, a position compared to the 2013 season.

Danica Patrick had come a long way regarding improving since she had 89 more points compared to her Rookie season despite the position. Her 2015 season got off to a reasonable start, but later, she was involved in a collision that cost her fine of $50,000 and probation for a few months. More so, they took fifty owner and driver points of her season records.

The next year, Danica Patrick was involved in another crash, which was undoubtedly the worst of her career. However, she received proper medical attention and recovered fully. Nevertheless, Patrick ended the season in 24th spot with the best finish in Charlotte’s fall race and set another record of highest career laps.

Danica Patrick has had many media opportunity, due to her status and good looks. These include a host of Spike T.V and cover of Sports Illustrated magazine among others. Also, she has featured in various famous commercials and music videos.

Here are some of the criticisms faced by the talented Danica Patrick;

• Robby Gordon claimed that her body which is relatively low weight posses as a disadvantage in racing.

• Kyle Petty has once described her as a `marketing machine’ rather than a race driver.

Danica Patrick is the first woman to race, earn the 4th spot, and lead a run at the Indianapolis 500, in 2005.

• Became the first woman to finish top in an Indy car race in 2008.

• Became the first woman to win a pole position at the NASCAR event in 2013.

Got married in 2005, to a physical therapist named Paul Edward but got divorced in 2013. During the same year, she was allegedly dating Ricky Stenhouse Jr, a fellow stock car driver.