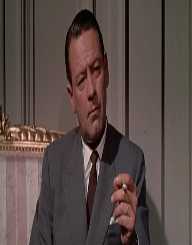 George Seaton was an American screenwriter and director who is best known for his classic Christmas film, Miracle on 34th Street.

Seaton was born as George Stenius in South Bend, Indiana on 17 April 1911. His parents were Swedish immigrants. Upon graduating high school he was accepted to Yale University but instead joined a stock theatre company in Detroit as he wished to become an actor. Seaton earned the modest sum of fifteen dollars a week for his stage acting. He supplemented this by providing voice work for the radio show, The Lone Ranger. Seaton created the Lone Ranger’s catchphrase ‘Hi-yo Silver’ as he was unable to whistle, which is what the script directed him to do when calling his horse.

Seaton wrote a draft play in 1933 and sent it to Metro Goldwyn Mayer (MGM). Producer Irving Thalberg read the script and he hired Seaton as a screenwriter. Seaton worked as part of a team of screenwriters, pitching ideas and writing jokes for scripts. His breakthrough came from his work on the Marx Brother’s film, A Night at the Opera. The film was a hit, and Groucho Marx was impressed with Seaton’s work and sought future collaborations.

Seaton worked with the Marx Brothers on the film, A Day at the Races. The film was released in 1937 and was a major success; it was also Seaton’s first credited film as a screenwriter. Seaton collaborated with Columbia Pictures producer William Perlberg, who took a liking to Seaton’s work. When Perlberg moved to 20th Century Fox Seaton joined him. Perlberg gave him creative freedom and 1943 the Seaton penned, The Song of Bernadette, was released. The film was a critical and commercial hit. 1944 saw Seaton stage his first Broadway production, he wrote, But Not Goodbye and it ran for twenty-three performances. He made his debut as a director in 1945. He directed the Diamond Horseshoe, although it was well received its high production costs undermined its success at the box office.

Seaton combined his writer and director roles on some films with 20th Century Fox between 1945 and 1950. These works included The Shocking Miss Pilgrim and The Big Lift, as well as his most famous work Miracle on 34th Street. Miracle on 34th Street was released in 1947 and was a huge success. Seaton served as president of the Screen Writers Guild from 1948 to 1949. He worked with Perlberg at Paramount Pictures on the hit film The Country Girl. Perlberg served as producer while Seaton wrote the screenplay and directed the film. Perlberg and Seaton also combined on the 1954 war film Bridges of Toko-Ri and The Tin Star 1957 western. In 1955, he was named the president of the Academy of Motion Pictures Arts and Sciences, a role he held until 1958.

In 1967, Seaton returned to Broadway with a play he wrote Love in E Flat, like his previous effort it failed to enjoy success commercially or critically. He remained productive during the 1960s working on five films. The film Airport, which Seaton directed and wrote the screenplay for, was a huge commercial success. It earned over a hundred million dollars at the box office and remains one of the top 50 highest grossing films of all time. His last film was Showdown, a western released in 1973.

Seaton married Phyllis Loughton in 1936. Loughton was a dialogue director and was the first ever woman to be elected mayor of Beverly Hills. Together they had a son, Marc. Seaton died of cancer on 28 July 1979.

Seaton was christened a Roman Catholic, but attended a Jewish school and had a bar mitzvah as a teenager.