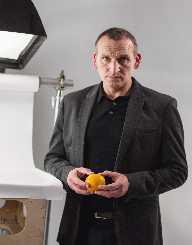 Christopher Eccleston was born on February 16th, 1964 in Lancashire, England. Growing up, Eccleston was greatly influenced by golden age performers on film and the TV industry. At the age of 25, he made his first way to the stage while performing in A Streetcar Named Desire. Throughout Eccleston’s film career, he has featured in some hit films. His notable role that brought him to stardom was when he starred in Doctor Who, a popular BBC production.

Christopher Eccleston was born on February 16th, in 1964. His is a notable English actor who was born to a working-class family. He was the third born son and the youngest child of Ronnie and Elsie Eccleston. His two brothers Keith and Alan were born twins. During his early years, he went on to study at Joseph Eastham High School. When he was in his late teens, he had been inspired to venture into acting by being a fan of popular TV shows such as Boys from the Blackstuff. This prompted him to enroll with Salford Tech for two years where he could undertake a Performance Foundation Course. After that, Eccleston attended Central School of Speech and Drama to work on his acting skills. He made a few on-stage appearances before making his professional on-stage debut at the age of 25. He was a cast in A Streetcar Named Desire. After completing his education, he went through odd jobs to earn a living. He went to work in building sites, supermarkets, and also tried out modeling for artists.

Aside from being a cast in the movies mentioned above, Christopher Eccleston was also active on TV. Before becoming famous in this arena, he appeared in some shows including Inspector Morse – 1991, Poirot – 1992, Business with Friends – 1992, Our Friends in the North – 1996, and Othello – 2001. His first major role on TV came around in 2005 when he featured the ninth individual to play the lead role in Doctor Who – 2005. This was a BBC production that was aired for 13 seasons. Partly, this is his TV personality that brought Eccleston to nationwide popularity. Doctor Who TV series was once listed as the longest running sci-fi series in the Guinness World Records. Eccleston dropped out from his notable role and was replaced by David Tennant. Other characters on TV that he has appeared in are The Shadow Line – 2011, The Borrowers – 2011, The Leftovers – 2014 to present, and Safe House – 2015.

In 2011, Eccleston wedded Mischka. They welcomed their first son months later in February 2012. They named him Albert. Esme, their second born child, came in 2013. In 2015, the couple divorced each other. In English football, he is a huge fan of Manchester United.