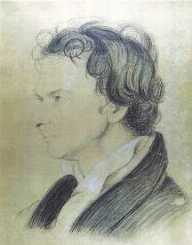 William Hazlitt was born 10th April 1778, in Maidstone, Kent, England, to William Hazlitt Sr., and Grace Loftus. His father was a Unitarian Minister, and when Hazlitt was two, his family moved to Shropshire. They then moved to County Cork in Ireland, and from there, in 1783, to the United States. Hazlitt Senior was trying to find himself a posting as a minister, but his efforts were to no avail. In 1786, the family returned to England. Hazlitt’s early schooling was mostly done at home. He was only 13 when he had his first piece published, which was a letter to the Shrewsbury Chronicle.

In 1793, he was sent to the New College at Hackney, which was a Unitarian seminary. He was there for two years, and his curriculum included Greek and Latin classics, mathematics, history, government, science, and religion. There was a lot of political upheaval at the time, including the French Revolution, and Hazlitt had non-conformist thinkers amongst his teachers, like Richard Price and Joseph Priestley. Hazlitt was able to think for himself, and left the faith, although he didn’t do it openly in respect for his father. He left Hackney before joining the ministry. After William Hazlitt returned home in 1795, he continued to come in to contact with eminent thinkers and writers. He decided he was going to become a philosopher, and studied ferociously with this in mind.

In 1798, William Hazlitt met Samuel Taylor Coleridge, and it was to have a profound effect on his writing in years to come. Hazlitt also took up painting in 1798. He learned from his brother, John. Whilst philosophy and thinking were a noble pastime, Hazlitt needed to earn a living, hence the interest in painting. He became quite proficient in the following few years, to the point where he had a portrait of his father included in an exhibition at the Royal Academy.

In 1802, as William Hazlitt became more well-known for his artistic work, he was commissioned to do some work in Paris, copying some of the works done by the “old masters” that were in the Louvre. Hazlitt loved his time in Paris. Upon returning to England, he had work lined up to paint portraits, but in 1812 he was hired by The Morning Chronicle as a reporter. Soon after, he was also writing for The Examiner, and in 1814, The Champion also came on board with work for him. William Hazlitt was, by this time, writing prolifically.

In 1814, William Hazlitt moved his family into a house in Westminster, which had previously been occupied by the famous English poet, John Milton. Hazlitt had great admiration for Milton. His landlord was another famous philosopher, Jeremy Bentham. Throughout this period, from 1805 to 1812, Hazlitt had several works published, and was also a lecturer at the Russell Institution in London, speaking on British philosophers.

In 1815, William Hazlitt was approached by The Edinburgh Review, which was considered a prestigious publication at the time, and became a regular writer for some years. In June 1815, Napoleon was defeated at Waterloo. This was a significant event in Hazlitt’s life, as he had idolized Napoleon for years. William Hazlitt became very depressed and took up heavy drinking. His household descended into disarray, and his marriage deteriorated. He had part-time work as a drama critic, and this allowed him to stay away from home. He would stay out late, spending time at the theatre, and then with those that would put up with his behavior, but people soon got sick of him.

William Hazlitt was a champion for the “common man,” and he felt Napoleon’s defeat was a setback for the cause. He continued to write through this period, particularly against those who he thought ignored or minimized the cause of “rights of the common man.” In 1817, William Hazlitt released a book called, Characters of Shakespeare’s Plays. This publication established him as a leading Shakespearean critic. That same year, a collection of 40 of his essays that had been in The Examiner, as part of a column called, The Round Table, was also published in book form. In 1818 and 1819, he had several books published that were different collections of lectures that had been given at several universities. Further essays were published in 1822, and in 1825, Hazlitt published The Spirit of the Age: or, Contemporary Portraits, which was a collection of sketches he had done of 25 prominent people of England.

In 1819, William Hazlitt and his family were evicted from their residence. His career was very up and down, as he had been attacked on both a personal level and professional level by a rival Tory publication. Although he was able to salvage some face, the damage had been done, and Hazlitt went from making a comfortable living with his writing, back to struggling to get it in print.

William Hazlitt began to withdraw to a country retreat where he would shut himself up for days at a time to write. One periodical that took his work was London Magazine, to which he was a regular contributor. In 1820, he took up lodgings in London, from a tailor named Micaiah Walker. His marriage had failed, and his father had recently died. The tailor had a daughter, 22 years younger than Hazlitt, but he became infatuated with her nonetheless. She led him on, as well as another fellow lodger until she made up her mind which of the men she preferred. Hazlitt’s wife agreed to give him a divorce so that he could remarry. His dalliance with the tailor’s daughter did not eventuate into anything, and it took Hazlitt some time to get over it.

William Hazlitt continued to write over the next few years, continuing to get his works published, and continuing to contribute to various publications. William Hazlitt met Isabella Bridgwater in 1823, and she would become his second wife. In September 1824 they took off on an extended tour of Europe for 12 months, during which time Hazlitt continued to write.

In 1828, William Hazlitt began a biography of Napoleon. Prior to this, in 1826, Hazlitt returned to Paris with his wife, to research the upcoming biography. They stayed in Paris, which was a distraction to Hazlitt. His son visited, and this caused division between Hazlitt and his wife. Other issues were also present, and when Hazlitt returned to London with his son in 1827, he was shocked to discover that his wife, who was still in Paris, was leaving him. He continued to contribute to periodicals, but the damage done by critics in Tory publications stuck, and Hazlitt’s work continued not to sell. He released a four-volume set on Napoleon, but it was a financial failure. William Hazlitt passed away in 1830. As well as the many publications released during his lifetime, there were many works released posthumously as well.

William Hazlitt married Sarah Stoddart in 1808. The couple had three sons, but only one survived past infancy.

His second marriage was to Isabella Bridgwater in 1824, but they separated in 1827.

Although William Hazlitt’s work fell out of favor for a period, his popularity re-emerged in the late 1990’s. He is, today, considered one of the greatest critics and essayists in English history. William Hazlitt is also said to be the best art critic of his time.

Even though he has such acclaim, Hazlitt’s work is largely out of print.