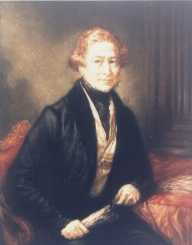 Robert Peel was born on 5th February 1788 in Bury, Greater Manchester, England. His father was a wealthy cotton mill owner. His mother was Ellen Yates.

Robert Peel was schooled by Rev James Hargreaves until he was ten years old. After that, he attended a school in Tamworth. He then went to Harrow (1800-1804) and after that was admitted to Christ Church Oxford. He was awarded a double first in Classics, Mathematics and Physics in 1808. In 1814, he obtained his MA. He was thinking of studying law when his father bought him a seat in Cashel, Tipperary and instead, he had turned to a career in politics.

Robert Peel was the Under-Secretary for War and Colonies (1809) and then the Chief Secretary for Ireland (1812). In 1822, he was Home Secretary, and it was during this time that major reforms to the prison and criminal law system in the UK took place. He was responsible for creating the modern police force, and this is when the words bobbies and peelers entered the vernacular.

Robert Peel was Home Secretary in 1830 when the Tory party lost the general election. Earl Grey took over as the leader of the Whigs and in opposition. Grey’s parliamentary reforms passed in 1832. The Whig government only lasted for two years before King William IV replaced it with a new Tory administration and Peel was appointed Prime Minister.

Around this time, Robert Peel was still dealing with the Reform Act. He was in favor of a less rigid form of conservatism. It was a difficult time for Peel because he was Prime Minister, but his party held a minority in the House of Commons. Things came to a head in 1835, and he resigned. By 1841, the Tory’s were in power again. This period involved in some important issues; including the Mines Act of 1842. This act prevented employers from using children and women in underground mining activities.

The Factory Act of 1944, again focusing on women and children, ensured shift hours were limited. The biggest issue of Peel’s career was the repealing of the Corn Laws. Initially, the corn laws had been put in place to protect agriculture in the UK. The repeal was needed to allow food to be release food into Ireland. The potato famine in Ireland was at its height (1845-1852) with millions starving. The Landowners were not willing to go along with repealing the act. Peel’s Conservatives abandoned him on this issue, and the debate raged on. In June 1846, with assistance from the Radicals and the Whigs, Peel won the day, and the Corn Laws were repealed. Peel resigned shortly afterward and left politics.

Twice Prime Minister, Robert Peel was involved in the modernization of the police force. He also fought hard to have the Corn Laws repealed (1846) and succeeded in doing so, against the majority of conservatives in his party and the vested interest of landowners.

Robert Peel married Julia Floyd in 1820, and they had seven children.

Four of Peel’s son entered public life. Robert, his eldest son, was appointed Chief Secretary of Ireland (1861-1965). His second son was a railway commissioner. His third son William Peel was a recipient of the Victoria Cross, and a naval commander. His fifth son, Arthur Peel, was Speaker of the House of Commons.

After his resignation in 1846, Robert Peel continued to be an influential leader. He also continued his support of free trade principles.

Will be remembered as the person who gave his name to the slang term Bobby for a policeman on the beat and a politician that fought hard for the repeal of the Corn Laws. There are many placenames and memorials associated with Robert Peel, including statues around the world.

The Corn Law Repeal Act caused a major controversy during his final years in parliament and led to his resignation in 1846.