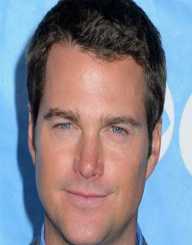 Chris O'Donnell is an American actor of German and Irish ancestry. O'Donnell took on the lead role of special agent G.Callen in the crime drama NCIS: Los Angeles. The series was a spin-off of NCIS wherein O'Donnell made a guest appearance for two episodes. What he thought would be a guest appearance turned him into a series regular of the spin-off. From there, he played the same role through the following episodes with co-star LL Cool J.

The youngest of seven children, Christopher Eugene O'Donnell, was born on 26th June 1970 in Winnetka, Illinois. His father was William Charles O'Donnell Sr., who is of Irish descent. His mother Julie Ann, on the other hand, has a trace of German, Swiss and English blood on her lineage.

O'Donnell has two older brothers and four older sisters. He was raised in a family of Roman Catholics. He attended Loyola Academy in Wilmette High School and enrolled at Boston College upon his graduation on 1988. He took a bachelor's degree in marketing.

At the young age of 13, Chris O'Donnell had already started doing various modeling gigs and appeared in selected commercials. His sister urged him to take on a modeling career after she persuaded a talent agent into meeting him.


The Road to Stardom

It was during one of these commercial gigs that shot O'Donnell to stardom. He was selected to play a role in a McDonald’s commercial. In the ad, he served breakfast to basketball superstar Michael B. Jordan.

From then on, various offers have appealed to O'Donnell landing him a small acting role in Jack and Mike. The drama series ran from September 1986 to March 1987.

Following his appearance on Jack and Mike, he was cast to play the role of Chris Macauley in the 1990 comedy-drama Men Don’t Leave. He starred alongside famed actress Jessica Lange. O'Donnell almost skipped the audition since he was set on modeling, but his mother thankfully bribed him into it. In the movie, he played the role of Jessica Lange's son.

Chris O'Donnell was also cast in School Ties. The film tells the story of a Jewish young man enrolled at an elite preparatory school. He starred alongside Brendan Fraser, Matt Damon, and Ben Affleck.

Aside from Lange, he also managed to work with veteran actor Al Pacino of the famed Godfather movies. They acted together in the 1992 remake of the film Scent of a Woman. It tells the story of Charlie Simms, played by O'Donnell, who takes care of a retired army officer Lt. Col. Frank Slade, played by Al Pacino. Adopting the persona of Simms made him a nominee in a Golden Globe Award for the role of Best Supporting Actor.

The following year Chris O'Donnell got the lead role of  D'Artagnan in the Three Musketeers movie with Kiefer Sutherland and Charlie Sheen.

After The Three Musketeers, he once again shared the screen with actress Jessica Lange in the 1994 drama film Blue Sky. The film received positive reviews and was a critical success although it was aired at a much later date.

With growing offers for varying roles, O'Donnell finally donned the sidekick role of Dick Grayson, the first Robin, in Batman Forever. Val Kilmer took on the lead role of the masked vigilante in this film. He was one of two finalists being considered for the role of Robin, the other being Leonardo di Caprio. Ultimately, he was chosen thanks to the efforts of 11 -year-old kids who attended a comics convention and voted for him. The producers held a poll asking which would win in a fistfight between the two actors and the kids opted for O'Donnell. Coincidentally, in the 1992 film Titanic, O'Donnell was favored by 20th Century Fox to play the role of leading man Jack Dawson, but di Caprio was cast instead.

Playing the role of Robin in Batman was the boon and bane of Chris O'Donnell's film career. Batman Forever was a hit in theaters but the following movie, Batman & Robin, was not.

His reprisal of the role with George Clooney as Batman in the film turned out for naught since the movie was a flop. It did well as a box office film, but it did damage to O'Donell's career.

From there, he decided to star on a selected number of films of which his 2000 film Vertical Limit, was his most noticeable one. He rejected the role of Agent J in the sci-fi comedy film Men In Black for fear it might be the same as his character in Batman & Robin.

Regardless of these, on 5th of March 2015, he was awarded his star on the Hollywood Walk of Fame at Hollywood Boulevard.

O'Donnell as a TV Regular

With multiple failed attempt at film comebacks, Chris O'Donnell turned to TV roles instead. Before becoming a series regular in NCIS: Los Angeles as G. Callen, he appeared in many TV series. Most prominent among these were Grey's Anatomy, Two and a Half-Men and The Company.

Away from Hollywood limelight, O'Donnell was granted the opportunity to tend to his family instead. He married Caroline Fentress on April 19, 1997. Together, the couple has five children namely: Lily, Christopher Eugene, Charles McHugh, Finley, and Maeve Frances.

Admiringly enough, O'Donnell proudly handles his kids without a caretaker. Besides being a dedicated and loving husband to his wife and children,  he is also a dedicated fan of golf. He frequently played golf at Kirkwood National Golf Course during the filming of his 1999 comedy drama Cookie's Fortune. O'Donnell is a member of the Pine Valley and Bel Air Country Club golf club.

In 2000, he participated in a fund-raising event for the humanitarian organization Motion Picture & Television Fund. The golf event has raised $500,000 for its cause. The MPTF, as it is popularly known, aims to help those who have little to no resources involved in the industry of film and television.