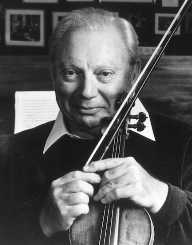 Isaac Stern was born on 21st July 1920, to Solomon and Clara Stern. He was born in Kremenets, Ukraine. At the time he was born, his birthplace was part of the Russian Empire. Stern was just over a year old when the family moved to the United States, settling in San Francisco.

He started music lessons at the age of eight with his mother. In 1928, Stern enrolled at the San Francisco Conservatory of Music. He studied there until 1931, being privately tutored by the world-renowned musician, Louis Persinger.

Stern returned to the Conservatory for a further five years, studying with Naoum Blinder.

Stern made his musical debut in 1936 at the age of 15. He performed with the San Francisco Symphony, performing Saint-Saens Violin Concerto No. 3 in B minor.

In 1940, Sternjoined forces with Alexander Zakin, a Russian pianist. The two performed together regularly until 1977, appearing in major concert halls and venues all over the world.

Stern established a reputation over the years for discovering young performers coming through. These included Yo-Yo Ma and Jian Wang who were celloists, and Itzhak Perlman and Pinchas Zukerman who were both violinists.

He also became renowned for his recordings. Stern recorded prolifically through the years and performed works from many of the major composers like Bach, Beethoven Mendelssohn, Tchaikovsky, and Vivaldi. Stern signed a record deal in 1945, and he remained with the same recording company for his entire career.

As well as the recordings that he did, Stern undertook a grueling schedule of touring. In 1949 alone, he performed in 120 concerts. He was the first American to tour Russia after World War II, and even though he returned several times, he eventually boycotted the country.

Stern also became involved in movies. In several movies such as Fiddler on the Roof, Stern dubbed the violin playing of the actors. He also appeared in movies, such as Music of the Heart (1999). Stern appeared in many television shows as well, including, 60 Minutes, Today, Good Morning America, and Sesame Street.

Stern co-authored his autobiography with Chaim Potok. It was called My First 79 Years.

In 1979, China invited Stern and pianist David Golub to tour the country. While in China, Stern performed with the China Central Symphony Society, which was turned into an award-winning documentary called, From Mao to Mozart: Isaac Stern in China.

In the 1960s, the famous Carnegie Hall in New York City was earmarked for demolition. Stern was instrumental in saving the building. The Hall was purchased by New York City, and when the Carnegie Hall Corporation was established, Stern was appointed President and remained in the position until he died.

Among his many awards and honors, Stern has the following:

Awarded the Presidential Medal of Freedom in 1992.

In 1948, Stern married Nora Kaye, a ballerina. They divorced 18 months later but remained friends over the years.

In 1951, he married Vera Lindenblit. The couple had three children, two of whom grew up to become conductors. The couple divorced in 1994.

Stern’s third marriage was in 1996, to Linda Reynolds.

Stern died on 22nd September 2001, the cause of death being given as heart failure.