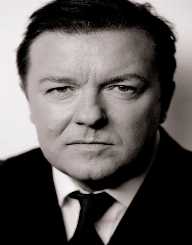 Ricky Gervais was born on June 25, 1961, in Reading, Berkshire, England. His parents are Sophia House and Lawrence Gervais. His siblings are Lawrence, Marsha, and Robert Gervais.

As a young adult, Ricky Gervais attended University College London. He later graduated from this school with a bachelor’s degree in philosophy.

Before Ricky Gervais was involved with television, he had a variety of careers in the entertainment industry. One of his jobs was being the lead singer of the band Seona Dancing. The band first formed in 1982. The other member of this band was Mill Macrae. Even though the band was together for two years, the band only had four songs: Bitter Heart, More to Lose, Tell Her, and You’re on My Side. While this band did not make Gervais famous in England, the band was popular in the Philippines for a short time. The band broke up in 1984 because of a lack of a fan base.

After being in a band, Ricky Gervais went on to work as a radio station assistant. Shortly after this, his television career began.

Ricky Gervais’s acting and writing career began around the same time, in the late 1990’s. In 1998, Ricky Gervais wrote for the show, The 11 O’Clock Show before going on to work on the comedy shows, Comedy Lab and The Jim Tavare Show in 1999. In the same year, he also began to appear in sketches in The Jim Tavare Show. This show put his

As the 2000’s began, Gervais’s fame started to grow. In 2000, he began writing for the shows Bruise and Meet Ricky Gervais. Beginning in 2001, Ricky Gervais also began working as a director, but he also continued to write and act. In 2001, he began working on what would later lead to one of his biggest television successes: The Office (UK). This show is often credited for being the show that kicked off the trend of television workplace comedies. This show aired for two seasons, until its end in 2003. In the meantime, Ricky Gervais also worked as an actor in Dog Eat Dog and Happiness in bit roles.

After The Office (UK) ended in 2003, Ricky Gervais continued to write for several other television shows, including Stromberg, an Office-like show which aired in Germany in 2005. However, his most famous Office-like television show that he wrote for was The Office (US) which lasted for nine seasons, beginning in 2005 and lasting until 2013. The show has since become a beloved American cult classic which likely influenced similar shows like Parks & Recreation and 30 Rock, neither of which were written by Ricky Gervais. Also in 2005, he began writing and acting for another show, Extras, which lasted for 13 episodes. He also took on small roles in several films, which include For Your Consideration, Night at the Museum (I-VI), and Stardust.

In the 2010’s Ricky Gervais has continued to stay active as a writer, producer, director, and actor. Just in this decade alone, he has written dozens of episodes for The Ricky Gervais Show, Kontoret (a Swedish “The Office” show), Life’s too Short, Derek, and  Konttori (a Finnish “The Office” adaptation). Most recently, many of Gervais’s on-screen acting appearances have been voice roles. He has voiced characters on many famous shows, including The Simpsons and Family Guy.

Ricky Gervais has also played himself on shows like Sesame Street and Curb Your Enthusiasm. He has even played his character from the UK Office, David Brent, on the US Office in a couple of episodes. Ricky Gervais later played this same character on the show Learn Guitar with David Brent and in the film, David Brent: Life on the Road. He was also in the children’s film, Muppets Most Wanted.

Along with being great with writing television shows and films, Ricky Gervais has also been known for being great at writing children’s books. All of his books are listed below.

During his long career in television and film, Ricky Gervais has won over two dozen awards and has been nominated for over fifty others. Most of his awards are for The Office (US), one of which is listed below. Some of his most impressive awards are listed below.

Although Ricky Gervais is not married, he has been in a committed relationship with Jane Fallon since 1984. The couple has no children together.