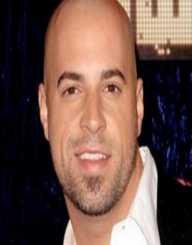 Christopher Adam Daughtry is an American rock singer, musician, guitarist, actor, and songwriter. He was born on December 26, 1979, at Roanoke Rapids, NC. He is the lead singer of the Daughtry band.

Chris Daughtry was born into the family of James “Pete” and Sandra Daughtry. He was raised in Lasker until he turned fourteen. He then moved to Palmyra. He has a sibling, Kenneth. He started singing at a young age. He took singing seriously at age sixteen. It was at Stacy’s music store he took guitar lessons from guitarist Matt Jagger.

He performed in rock bands during his high school days. He had two-stage production appearances, the Wiz and Peter Pan. He also performed with Matt Jagger and Brian Craddock in their respective bands.

During his high school days, Chris Daughtry was in a band called “Cadence.” He played rhythm guitar and sang lead vocals. They released an album “All Eyes on You” in 1999.

Chris auditioned for the CBS Rock Star, INXS singing contest and failed. He later auditioned for American Idol. He sang “The Letter” and made the audition only by receiving two out three approvals. Simon Cowell was the one who disapproved, saying Chris was too robotic. But Chris later made it to the top 24 in the event.

On March 3, 2006, Chris Daughtry was offered to be the lead singer of Fuel. He declined the offer. He wanted to create his band. He stated that he would still like to work with them later.

Later on, he made it to the final four in the competition. He was later eliminated unexpectedly, being in the bottom two. He didn’t have many votes. He claimed that his fans were overconfident. That they didn’t vote because they thought he was safe.

Chris began to make a wave. His cover of “Wanted Dead or Alive” was billboard chart number 43. He later signed a record deal with 19 Entertainment and RCA Records. He worked on an album to be released in November.

Chris Daughtry created the Daughtry band. The band’s singles made a lot of billboard numbers, even reaching number one on the list. Chris performed “Home” at the end of the 6th season of the show. This song was used as an elimination song later on the Idol show. It would be played whenever a contestant was eliminated. This was the breakthrough point of Chris Daughtry.

Chris Daughtry is the leader of the Daughtry band. The members of the band are Josh Steely, Andy Waldeck, Brian Craddock and Robin Diaz. Their first single was titled “It’s Not Over.” It was released in 2006. The album of this single topped the Billboard charts, as number one.

The band bagged three awards at the American Music Awards - Favorite Album, favorite artiste, and breakthrough Artiste. The categories were Pop or Rock.

On November 11, 2000, Chris Daughtry married Deanna. He has four kids, including a set of twins. Hannah and Griffin are his stepchildren from Deanna’s previous marriage. They were born on September 7, 1996, and June 30, 1998, respectively. The twins were born on November 17, 2010. Their names are Adalynn Rose and Noah James. He lives with his family in North Carolina currently.

There was no form of controversy between him and the band’s (Live) lead singer. Ed Kowalczyk called him to stop listening to all the controversy talk. Ed is Live’s lead singer.

On August 2, 2008, Chris Daughtry performed the song again with Ed and Live. This was at the Toms River Fest.