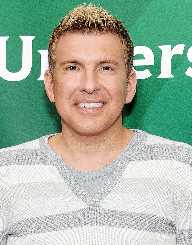 Chase Chrisley is the son of real estate mogul and entrepreneur Todd Chrisley and his second wife, Julie Chrisley. Known as the miniature version of his father, Chase was born on June 1, 1996, in South Carolina, USA. He has four siblings named Kyle, Lindsie, Savannah, and Grayson. Kyle and Lindsie are the step-siblings of Chase as they are the children born from Todd’s first marriage to Teresa Terry.

Chase attended a private Christian school and is a very religious person. During his childhood days, he took active participation in sports and excelled as an athlete. He aspired to be a professional baseball player. However, the American reality television series ‘Chrisley Knows Best’ starring him and his family changed everything for him.

Being the son of a multimillionaire businessman, Chase Chrisley was born with a golden spoon in his mouth. He enjoyed all the luxuries of life right from the time he was born. Growing up, he became quite active on social media too. But he rose to prominence with his antics on the show ‘Chrisley Knows Best.’ The reality show is aired on the USA Network and puts the life of Todd Chrisley and his family into the limelight. On the show, Chase is a mischievous young boy who is always trying to outsmart his perfectionist father. He is the charming trouble-maker of the family who, most of the times, attracts the ire of his father. His father keeps a vigilant eye on all his activities and frequently reprimands him for his buffoonery.

Chase does not miss any opportunity of playing a prank and always tries to bank on occasions when some other family member is under fire. His younger sibling Savannah Chrisley is his partner-in-crime. The two display the perfect balance of brother-sister rivalry on the show. One of the most memorable moments from his show was camping with his youngest sibling Grayson. Even though Chase is a complete prankster, he still is the most lovable character of the reality television series. He is nicknamed as ‘The Favorite’ on the show. His fans love watching him play different tricks every day and thereby, stir up trouble.

In one episode of the show, Chase Chrisley got a verse from the Bible tattooed on the side of his body. When his parents saw this, they were furious. Chase had to face the wrath of his father who demanded that Chase should immediately remove the tattoo and if he abided by his orders, then he would gift Chase a new Range Rover SUV. The intelligent Chase instantly accepted the offer as he was thrilled by the idea of receiving a $140,000 car as a gift by merely removing a $300 tattoo. Eventually, he did remove the tattoo and was gifted the car. In yet another episode, Chase stirred up the hornet’s nest when he declared his decision of donating sperm for the sake of earning money.

The show, which is now in its fifth season, made Chase Chrisley and his family immensely popular. Chase has been a part of the show for all of its four seasons. The first season of the show had premiered on March 11, 2014. The success of the show even reflected on the social media accounts of Chase. He has gained an enormous fan base and has over 730k followers on Instagram and more than 270k followers on Twitter.

Chase Chrisley has also been a part of a couple of television shows. In 2012, he appeared twice on the TV show titled ‘Steve Harvey.’ He was also seen in the TV show ‘The Real.’ For a brief period, he also had a podcast show named ‘The Chase Chrisley Podcast.’ As per reports, Chase and his sister Savannah will soon have their show titled ‘Growing Up Chrisley’ which will showcase their lives after getting into college.

The talented young teen lives in a posh mansion with his family. Even though his family is filthy rich, Chase Chrisley is regarded as the most down-to-earth and humble member of the family. He does not let the wealth and fame get the better of him. A prankster by nature, he still is a family-oriented guy and loves to spend time with his family. He considers his sister Savannah and niece Chloe to be his closest companions.

Chase Chrisley was in a relationship with Brooke Noury for a brief period. The two had a bitter breakup in October 2015. Later, it was rumored that Chase was dating Kim Zolciak’s daughter, Brielle Biermann but he soon rubbished off the reports. His current relationship status is single.

Chase, with his lively personality and attractive looks, is known to be a lady charmer. He is the one who is considered as the best person who can fill in the big shoes of his father. He is a very religious person and does not shy away from publicly showing his religious preferences. He often posts religious images and tweets on his social media accounts. Chase is also very fond of animals and has a pet dog named Lilo. He has also opened an Instagram account for his pet dog. He loves listening to music and is a huge fan of rapper Jay Z. Chase Chrisley also has an impeccable sense of style. The future seems bright for the talented star.