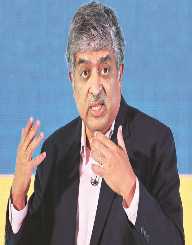 Nandan Nilekani was born 2nd June 1955, to Durga and Mohan Rao Nilekani. He was born in Bangalore, India (today called Karnataka, India). His father worked in management for Mysore and Minerva Mills and was a supporter of Fabian Socialist ideals, which had an influence on Nilekani as he grew up.

Nandan Nilekani completed his high school studies at St. Joseph High School in Dharwad, and then went on to Karnataka PU College, Dharwad. He went to the Indian Institute of Technology in Bombay, modern-day Mumbai.

In 1978, Nandan Nilekani started his first position, which was at Patni Computer Systems in Mumbai.

In 1981, Nandan Nil ekani worked in various roles, from Director to President, to Chief Operating Offer, and, in 2002, Nandan Nilekani was appointed Chief Executive Officer. He stayed in the role of CEO until 2007, and during his five years at the helm, the company grew to $3 billion.

He handed the role of CEO over to one of his colleagues, Kris Gopalakrishnan, and took on his new role as Co-Chairman of the Board of Directors.

In 2009, Nandan Nilekani was invited by the Prime Minister, Dr. Manmohan Singh, to serve as Chairman of the Unique Identification Authority of India, which he accepted. The Authority is responsible for introducing a National Identity Card in India. The project will have an identity number for every resident in India and has been flagged as the largest project of its kind.

Nandan Nilekani sits on several boards, some of which include, the World Economic Forum Foundation, the Board of Governors of the Indian Council for Research on International Economic Relations, and the Bombay Heritage Fund.

He also spoke at a TED conference in 2009, to discuss his thoughts on India and its future.

Nandan Nilekani is a member of the political party, Indian National Congress, but he is not active in politics. He contested a seat back in 2014 but didn’t win, and so put his political aspirations to the side.

He has written two books, Imagining India: The idea of a Renewed Nation (2009), and Rebooting India: Realizing a Billion Aspirations (2015).

2004:   Corporate Citizen of the Year – the Asia Business Leaders Awards by CNBC

Nandan Nilekani has received many honors and awards apart from these.

Nandan Nilekani married Rohini Soman, and they have two children, Nihar, and Janhavi.

The Nandan Nilekani have established a non-profit platform for literacy and numeracy called EkStep. Nandan Nilekani is currently the Chairman. The platform will have technology based gaming apps that will assist children with learning difficulties to improve their results.