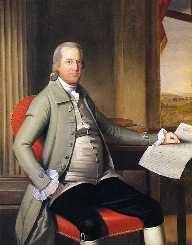 Charles Carroll also known as Charles Carroll of Carrollton was a wealthy American planter and the first United States Senator from Maryland. Born on September 19, 1737, he was one of the early advocators of independence from the Kingdom of Great Britain and the only Roman Catholic to sign the Declaration of Independence. Carroll served as a delegate to the Continental Congress and Confederation Congress. Elected as a delegate to the Continental Congress in 1776, he progressed to serve in the Maryland Senate from 1781 to 1800.

Charles Carroll was elected as one of Maryland’s first representatives to the United States Senate. However, he had to resign from his that position in 1792 after the Maryland state passed a law that barred individuals from serving concurrently in state and national office. Carroll was the longest surviving signatory of the Declaration of Independence.

Charles Carroll was born on September 19, 1737, in Annapolis, Maryland. He was the only child of Carroll of Annapolis and Elizabeth Brooke. He started his education at a Jesuit preparatory school, Bohemia Manor in Cecil County, Maryland. He left for France at the age of eleven. While in France, he continued his education at the College of St. Omer and later Lycee Louis-le-Grand in Paris. He graduated in 1755 and then pursued law studies in London. Carroll returned to Annapolis in 1765. His father granted him Carrolton Manor, and that is how he gained the title Charles Carroll of Carrolton.

Due to his religious faith, Roman Catholic, Charles Carroll was barred from several activities including practising law, participating in politics and even from voting. This was by the 1704 Act that sought "to prevent the growth of Popery in this Province."

Despite being barred from politics or holding any office in Maryland, Charles Carroll added his voice to the call for independence from Great Britain in the 1770s. With the pen name “First Citizen,” he was a frequent writer in the Maryland Gazette and other anonymous newspaper letters where he engaged in debates for the right of the colonies to control their taxation among other topics. His rival debater was Daniel Dulany the Younger who used the pseudonym “Antillon.” He gained popularity through these debates and became a known opposition of the British rule. Carroll was instrumental in the burning of the Peggy Stewart, on October 19, 1774, as part of the tea party protest against the parliamentary enacted Tea Act in 1773.

In 1774, Charles Carroll was elected to Maryland’s committee of correspondence, through which he represented the colony in most of the pre-revolutionary groups. A year later he was appointed to the Annapolis Committee of Safety. Carroll also served as a delegate to the Annapolis Convention from 1774 to 1776. The convention was Maryland's revolutionary government before the Declaration of Independence. He was elected to the Continental Congress on July 4, 1776, and that same year was part of the delegation to Canada that unsuccessfully sought for assistance from French Canadians in the confrontation with Britain. He remained as a delegate of the Congress until 1778.

The Signing of the Declaration of Independence

As part of the delegation to Canada, Charles Carroll returned late to vote on the Declaration of Independence. Nonetheless, he was available to append his signature to the document. To distinguish himself from the many other Charles Carrolls of the time, he signed as"Charles Carroll of Carrollton."

Member Of The US Senate

In 1780, Charles Carroll declined a re-election to the Continental Congress and the following year was elected to the Maryland State Senate. He will serve in that capacity until 1800. He was also chosen by the legislature to serve on the first United States Senate after the United States government was created. However, he resigned from the US Senate on November 30, 1792, after Maryland passed a law prohibiting people from concurrently serving in the state and national legislatures.

In 1801, Charles Carroll decided to take rest from public life. In 1815, he was elected a member of the American Antiquarian Society. After more than decades of retirement from public life, Carroll returned to help build the Baltimore and Ohio Railroad in 1827 followed by the commissioning of the Phoenix Short Tower in 1828 until the building of Washington Monument, the tower was the tallest building in the United States. On July 4, 1828, he laid the cornerstone of the railroad.

Charles Carroll has been named after several counties some in Arkansas, Indiana, Iowa, Illinois, Ohio, Maryland, and Mississippi among others. He is named after the Carroll Gardens in Brooklyn, and New Carrollton in Maryland. He also bears the name of Charles Carroll Middle School, Carroll University in Waukesha, Wisconsin and the Charles Carroll High School in Port Richmond, Philadelphia.

June 5, 1768, Charles Carroll married Marry Darnall with whom he had seven children of which only three survived infancy. They are Mary Carroll, Charles Carroll Jr., and Catherine ("Kitty") Carroll. Mary Darnall died in 1782. Carroll died on November 14, 1932, in Baltimore. He was interred in his Doughoregab Manor Chapel at Ellicott City, Maryland.