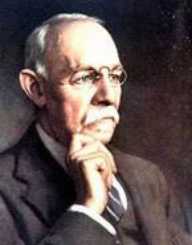 William Stewart Halsted was a pioneering American scientist and medical surgeon. He established the first school of Surgical Medicine at the John Hopkins University.

William Stewart Halsted was born in New York to William Halsted Jr. and his wife Mary Haines on September 23, 1852. He was the firstborn child in the family with three other siblings. He grew up in a well off family. His father had a successful business in New York.

He started his education at home by private tutors. In 1862 he went to a formal boarding school in Massachusetts. He left the school and joined Phillips Academy in Massachusetts. He eventually graduated in 1869. He continued his schooling at home and enrolled at Yale College in 1871. He proved to be a gifted athlete captaining the college football team. While at Yale, he got interested in medicine. He attended medical classes and researched in the college library. He graduated from Yale College in 1874.

William Stewart Halsted was admitted to Columbia University of Physicians and Surgeons. Despite having no medical credentials, Halsted excelled in his academics at the medical school. During his learning at the medical school, Halsted worked as the research assistant to John Dalton. Dalton was a revered professor of Physiology at the university. Halsted also worked at the university’s pharmacy.

He applied and was admitted as an intern at the Bellevue Hospital in New York. He impressed the admitting panel, which gave him a chance as a student surgeon at the hospital. Halsted apprenticed at the hospital for a year. He experienced dirty and unsanitary conditions during his rounds in the medical wards. He instituted the necessary sanitation procedures like the use of antiseptic on open wounds. Halsted graduated in 1877 with a medical doctor degree, emerging top of his graduating class.

On April 1878, William Stewart Halsted was hired by the New York hospital. He became the resident doctor at the institution. At the hospital, he instituted the practice of monitoring the patient progress through charts. Medical practitioners tracked the temperature, blood and heart pulse, and respiration via a hospital chart. He left the hospital after six months.

Due to the lack of training opportunities in the US, Halsted traveled to continental Europe for further studies. He spent most of the apprenticeship in Germany. He studied under the watch of world-renowned surgeons like Eduardo Bassini, Heinrich Braun, Albert von Koellicker and Max Schede. Halsted got much support from Professor Anton Woelfler. He returned to the US in 1880 with a wealth of experience from the various fields he had interacted with in Europe.

William Stewart Halsted practiced surgical operations in various hospitals in New York. He established his base at the Bellevue Hospital. Halsted made a tent that doubled as his antiseptic surgical ward. He also trained medical students with his new experiences. He emphasized on the hands-on practical examples rather than traditional theory than practical. He helped many medics in their studies and became a highly sought after practitioner.

In 1882, he operated his first milestone surgery in a US hospital. He operated on his mother defying medical ethics that bars doctors from operating on close relations. In the gall bladder surgery, he extracted seven gall stones from the patient. In another bold move, he performed an emergency procedure on his sister. He transfused his blood into her sister preventing her from bleeding to death after childbirth. Halsted was hailed as a gifted and daring practitioner of surgical medicine across the US.

In 1884, William Stewart Halsted turned himself into a guinea pig in a cocaine experiment. He injected cocaine into his bloodstream to test the effects of the drug. He concluded that the injection of the drug brought the desired anesthetic effects to surgical patients before the procedure. In the process, Halsted became addicted to cocaine. He went to Europe for a rehabilitation program in 1885. Upon his arrival back in America, he fell back into the addiction. In 1886 he went for rehabilitation at Butler Hospital in Rhode Island. He remained addicted to morphine and was banned from practicing in New York.

He continued working at different hospitals outside of New York. He was admitted to work as the chief surgeon at the John Hopkins Hospital in 1890. In 1892 he founded the first surgical medicine school at the hospital and became its inception professor.

William Stewart Halsted married Caroline Hampton in 1890. The couple produced no children. They lived in their farm in North Carolina until his death.

He is revered for his achievements in the medical field. He introduced the use of surgical gloves in theater procedures. He revolutionized the use of cocaine in anesthesia. Halstead designed procedures used in the operation of goiter, intestinal diseases, and breast cancer. These procedures became the standard norm for decades.