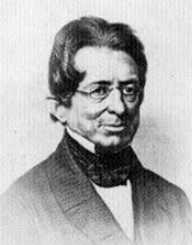 Thomas Hopkins Gallaudet was born 10th December 1787 in Philadelphia, Pennsylvania, in the United States. He had 12 younger siblings.

He studied at Yale University and graduated in 1805 with a bachelor's degree. Gallaudet then received his master's degree from Yale in 1808.

After Yale, he enrolled at Andover Theological Seminary in 1812, and he graduated in 1814. As a result, he received several offers to become a pastor. He declined, however, as he was an unwell man.

In 1814, Thomas Hopkins Gallaudet met nine-year-old Alice Cogswell, who was the deaf daughter of one of the neighbors.

He began to teach Alice the names of different things. He did this by drawing the item and its name in the dirt. As a result, Alice's father, Dr. Cogswell, invited Gallaudet to keep teaching Alice.

In 1815, Cogswell and some of his colleagues paid for Gallaudet to go to Europe. The purpose of the trip was to learn methods used for teaching deaf students. One of the main destinations was that of the Braidwood family in England, but they refused to share their knowledge.

Thomas Hopkins Gallaudet then met Abbe Sicard, who ran a deaf college in Paris. Accordingly, Sicard invited Gallaudet to the school where he could watch them teach. The school used manual communication, which Gallaudet liked.

One of the school's faculty, Laurent Clerc, returned to America with Gallaudet. With assistance from Cogswell, they toured New England to raise money to start a school for deaf students.

They started the school in Hartford, and it became known as the American School for the Deaf. Cogswell's daughter Alice was one of the initial students to enroll.

Gallaudet has several places named after him. These include Gallaudet University and a 100th anniversary memorial at the American School for the Deaf.

In 1821, Thomas Hopkins Gallaudet married Sophia Fowler. The couple had eight children, and Fowler was a former student.?