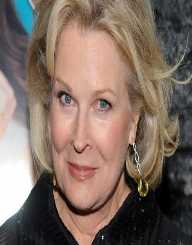 American actress Candice Bergen was born on the 9 May 1946 in Beverly Hills, California to Frances Westerman, a model, and Edgar Bergen, an actor, and ventriloquist.

She was a pupil at the Westlake School for Girls in Los Angeles as well as the Cathedral School in Washington DC. After graduating, she was sent to a finishing school in Switzerland. After returning from school in Europe, Candice Bergen enrolled at the University of Pennsylvania but left at the end of her sophomore year. During her time at university, she started modeling and also became interested in photography.

Candice Bergen was exposed to the entertainment industry as a child, and at a young age, she took part in her father’s radio programme as well as the quiz show You Bet Your Life, which was hosted by Groucho Marx. After dropping out of university, Bergen worked as a successful Ford model before concentrating on acting.

She married French film director Louis Malle in 1980, and they remained married until his death in 1995. The couple had one child, a daughter Chloe. Candice Bergen married Marshall Rose, a real estate developer. In 2016 her memoir A Fine Romance as published. She had earlier published a memoir Knock Wood in 1984.