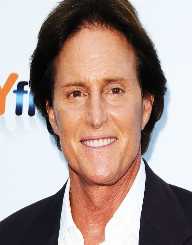 Caitlyn Jenner was born in Mt Kisco NY on 28th October 1949. Her parents were Esther Ruth McGuire and William Hugh Jenner. As a young child, Jenner was diagnosed as dyslexic and battled with learning, but excelled at sport. Jenner has two sisters Lisa and Pam. A younger brother Burt died in a car accident in 1976, shortly after Caitlyn’s triumph at the Olympic Games in Montreal.

When Caitlyn Jenner was training for the 1979 Olympics, she worked part-time as an insurance salesperson. As she was training eight hours a day for the Olympics, her first wife worked as a flight attendant worked to support them.
Since her Olympic success, Caitlyn Jenner has enjoyed a long and varied career. The 1976 Olympic success opened many doors. Subsequently, Caitlyn Jenner has done motivational speaking, acting, modeling, sports commentary and promotional work. She has owned businesses including Bruce Jenner Aviation and Jeanneret, a company providing software applications. She also achieved success as a racing driver in the 1980s. The promotional work included Bruce Jenner dolls, board-games, and clothing. Writing is another skill and Jenner has written number of books including Decathlon Challenge: Bruce Jenner’s Story (1977) and Bruce Jenner’s Guide to the Olympics (1979).

Recent books by Caitlyn Jenner include Finding The Champion Within (1996) and The Secrets of My Life. Acting roles include her appearances in Keeping Up With The Kardashians. Previously Caitlyn Jenner auditioned for the lead role in the movie Superman (1979). She was shortlisted, but the part was given to Christopher Reeve. She had a role in the 1980s movie Can’t Stop The Music. This movie flopped badly and had the dubious distinction of having won the first Worst Picture Golden Raspberry Award. As a model, Jenner has appeared on the cover of Playgirl and Vanity Fair as well as many other magazines.

Jenner’s freshman and sophomore years were spent at Hollow High School in Sleepy Hollow. She then attended Newtown High School in Connecticut for her junior and seniors years, graduating in 1968. Caitlyn Jenner then won a football scholarship and started studying at Graceland College in Lamoni, Iowa. When a knee injury forced her to abandon football, Graceland track coach, L.D. Weldon recognized Jenner’s talent and encouraged her to do participate in the decathlon.

The Olympic Gold Medal in 1976 was followed by being named the Associated Press Male Athlete of the Year (1976) as well as the James E. Sullivan Award (1976).

Caitlyn Jenner married her first wife Chrystie Crownover in 1972, and they divorced in 1981. They had two children together, a son Burton and a daughter Casey. At the time of their divorce. The reason for their divorce was that Jenner had fallen in love with Linda Thompson, Elvis Presley’s ex girlfriend.

Linda Thompson and Caitlyn Jenner married in January 1981 and had two children, Brandon Jenner and Sam Brody Jenner. The couple divorced in 1981. Jenner’s third marriage took place in 1991 when she married Kris Kardashian. Kris was the widow of Robert Kardashian, the lawyer who had represented O.J. Simpson at his trial. Jenner and Kris Kardashian had two children together, Kendall and Kylie. The couple separated in 2013 and were legally divorced by March 2015. Around the time that Caitlyn Jenner married Kris Kardashian, Jenner’s career had been drifting; some media reports claim that she credits Kris Kardashian with re-invigorating her career. (The Washington Post). Around this time, George Wallach, her sports agent, and the manager was let go. Shortly afterward, a lucrative deal involving exercise equipment was launched with advertisements on the cover of American Fitness magazine.

As a dyslexic person, Caitlyn Jenner found that studying at school could be difficult and frustrating at times. Jenner, however, excelled at sport. Jenner’s grandfather had run in various Boston Marathons. Jenner’s father William Jenner had won a silver medal at the U.S. Army Olympics in Germany in 1945.

Caitlyn Jenner attended the 1972 Olympics in Munich. Her greatest triumph which won her the title of ‘the greatest athlete in the world,’ was at the 1976 Montreal Olympics. She won a gold medal and set a new world record for the decathlon, 8176 points. After the win, Jenner took a small American flag from a spectator and did a victory lap, waving the flag. This started the tradition of flag waving by winners at sporting events. She returned home the all-American sporting hero and subsequently used her fame to build a career in the entertainment industry and business.

Caitlyn Jenner had a successful career as a racing driver in the 1980s, driving in the IMSA Camel GT series.

After the Montreal Olympics had catapulted her to fame, Caitlyn Jenner used her success and charisma to take financial advantage of the situation. This included the Wheaties promotion which saw an image of an athletic looking Caitlyn Jenner appear on the Wheaties cereal box. He endorsed many products such as Tropicana, Minolta, and Buster Brown.

As a child, Caitlyn Jenner was identified as dyslexic

Caitlyn Jenner has supported the Elton John Aids Foundation, GLAAD and the American Foundation for AIDS Research and the Point Foundation.

In February 2015 Caitlyn Jenner announced in an interview with Diane Sawyer that she had dealt with gender dysphoria all her life. She subsequently identified herself as a trans woman. In July 2015, Jenner had a naming ceremony, officially changing her name from William Bruce Jenner to Caitlyn Marie Jenner. Photographer Annie Leibovitz photographed Jenner for the cover of Vanity Fair, and the Washington Post commented “After all the magazine covers that featured the former athlete, once lauded as the world’s greatest athlete, the Leibovitz photograph will be the most meaningful. Looking directly at the camera, Jenner is finally herself for the first time publicly.” Jenner’s first two wives were both aware of her gender dysphoria but chose to keep the matter private out of respect for their former partner. Jenner has said that she has not undergone sex reassignment surgery, but has not ruled it out.

From the successful Olympian dubbed the world’s greatest athlete at the 1976 Olympics to Keeping Up With the Kardashians Jenner has made her mark in the world of sport and popular culture.

Jenner’s gender transition in February 2015 resulted in her being labeled “ the most famous transgender person in the world.”

The Wheaties promotional campaign resulted in Caitlyn Jenner having to appear in court in San Francisco in 1977. The San Francisco District Attorney accused General Mills of engaging in deceptive advertising. The case was subsequently withdrawn. Today these Wheaties boxes with Jenner’s image sell for hundreds of dollars on eBay.