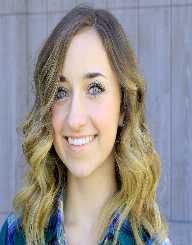 Brooklyn McKnight was born in 1999 in Utah, the United States. Her mother is a hairstylist, who enjoys creating exciting and creative hairstyles on a daily basis. So, ever since Brooklyn was just a young girl, not older than 18 months, her mother had started styling her and her sister’s hair. This experience from a very young age made her interested in all things related to fashion very early in life.

The first appearances that made Brooklyn McKnight famous were on the YouTube channel of her mother, Mindy McKnight. Mindy McKnight runs a “CuteGirlsHairstyles” channel. Later on, Brooklyn decided to found another channel on YouTube, this she succeeded to do together with her sister, Bailey McKnight. Their channel is called “BrooklynAndBailey.”

Both sisters are equally active on this channel, and upload videos about different fashion related topics. Brooklyn McKnight is becoming more and more popular, as she creates good explanatory step-by-step videos, and uploads quite regularly so that her subscribers have access to new information on a daily basis.

The YouTube channel “BrooklynAndBailey” has over 3,2 million subscribers, but the circuit of their mother Mindy McKnight has over 5 million followers. Brooklyn McKnight is also an active Instagram user, where she is followed by more than 2 million people.

The two accounts on YouTube generate them enough income for a family of eight people. At the moment the account “CuteGirlsHairstyles” is making approximately 4,7-75,3 thousand United States dollars every month, and the second account is also increasingly successful.

Brooklyn McKnight’s items of interest are fashion, and personal life matters. She talks on her videos about babysitting, gives fascinating insights into budget fashion tips, explains how to better apply makeup for beginners, gives out dating advice and shares some family-friendly activities, which are not only fun but are also useful to re-connect.

Some of the most popular videos uploaded by Brooklyn McKnight are also covering less familiar topics, as, for example, “Wisdom Teeth Video,” “The Other Parent Trap,” or “Expectation vs. Reality: the Last Day of School”.

Brooklyn McKnight is not only very active on YouTube, but also has appeared elsewhere. In the year 2008, Brooklyn McKnight was participating in a movie “The Adventures of Foodboy.” The star of “High School Musical” Lucas Grabeel also is starring in this film.

McKnight has appeared on a show “Anderson Live.” Anderson Cooper hosts the show.

Together with her sister Bailey, McKnight has recorded a cover for the song “A Life That’s Good.”

Brooklyn McKnight is most recognized for her long hair and big eyes that give her a princess-like appearance. Her family has adopted two other kids of dark skin, which makes them a charming family, who send out a positive message.

Apart from working and studying, Brooklyn McKnight spends most of her time with her family and family pets. They have two dogs. McKnight adores Taylor Swift and pursues to attend as many of Swift’s concerts as possible.

What’s in the future

Brooklyn McKnight is planning to develop and launch her makeup line with her sister. They are also considering partnering with an already known brand to launch their line.

Brooklyn McKnight sees her studies as the top priority, regardless of how the career in fashion develops. Currently, McKnight is sixteen years old and preparing to do the ACTs. She expects to start attending college campus tours shortly to decide on further education.

At the moment Brooklyn McKnight has a dilemma between attaining a degree in business and becoming a child psychiatrist.