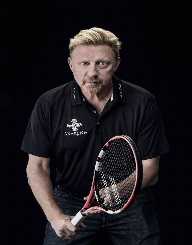 Boris Becker is a very successful former German tennis who at a point reigned as the World No.1 professional tennis player. Born on November 22, 1967, he earned the nicknames "Der Bomber," “Boom Boom” and "Baron von Slam," for his fast and well placed-serves and the powerful volleying skills at the net. Boris Becker started his career on a very good footing by winning all his first six major single titles at age 17. His other wins include 13 Masters Series titles, five-end championships and an Olympic gold medal in doubles.

Boris Becker was ranked the 11th best male player of between the periods of 1965 to 2005 by the Tennis magazine. Boris Becker found it difficult to manage the fame that came with his early success and that had adverse effect on his personal life. After his professional career, he had been involved in tennis related ventures including coaching, current world number one Novak Djokovic for three years.

Boris Becker was born to Elvira and Karl-Heinz Becker on November 22, 1967, in Leimen, Germany. Boris Becker was raised in the Catholic faith since his mother was one. His father was an architect and the founder of a tennis center in Leimen, and that was where Boris Becker developed interest and learned tennis.

Boris Becker revealed during the early days of his career that, "The plan from my parents for me was to finish school, go to university, get a proper degree and learn something respectful. The last thing on everyone's mind was me becoming a tennis professional."

Boris Becker started his professional tennis career in 1984, under Romanian-born coachGünther Bosch and Romanian manager Romanian manager Ion Tiriac. That year, he won his first professional double title in Munich. In 1985, he won the Tennis World Young Masters at the NEC in Birmingham, and that was followed with his debut top-level singles titles at Queen’s Club. Becker’s impressive performance continued by becoming the first unseeded player and first German to win a Wimbledon singles title by defeating Kevin Curren in four sets.

At age 17 and 227 days, he became the youngest male Grand Slam singles champion, a record broken by Michael Chang in 1989 after winning the French Open when at age 17 year, 110 days.

Boris Becker never relented on his efforts, and he went ahead to win the Cincinnati Open in 2005, becoming the youngest to win that title. He went on to defend his Wimbledon title by defeating World no. 1 Ivan Lendl in a straight set in 1986. Boris Becker rose to become World no.2 in 1987 and that same year, the world no. 70 player Peter Doohan defeated him in the second round of the Wimbledon game.

Boris Becker and McEnroe game in the Davis Cup in 1987 lasted 6 hours and 22 minutes, becoming one of the longest matches in tennis history. He, however, won the game with 4–6, 15–13, 8–10, 6–2, 6–2. Boris Becker continued his successful career by winning the year-end Masters title in New York City in 1988, WTC Finals, Grand Slam Singles title in 1989 and becoming ATP Tour Player of the Year after helping Germany to retain the Davis Cup in 1989.

He became World no. 1 after defeating Ivan Lendl to win the Australian Open in 1991, the first time I his career. The following year, he won seven tour titles including his second ATP Tour World Championships. Boris Becker’s career suffered a huge setback and decline in 1993 after his marriage to Barbara Feltus fell on the rock coupled with tax evasion problems with the German Government. His declined continued into early 2005. His sixth and final Grand Slam was won in 1996 by defeating Chang in the Australian Open. Throughout his career, he won 49 singles titles and 15 doubles titles.

After retiring from professional career, he has been a poker player and has played in the European Poker Tour and the World Poker Tour. As at 2013, he had earned more than €90,000 from poker. In has served as a commentator for BBC at Wimbledon since 2003. Boris Becker served as the Head Coach for Novak Djokovic in the 2014 season and contributed in 6 of Djokovic’s 12 Grand Slam victories and 14 of his 30 Masters 1000 titles within that period. The two parted ways in 2016. Boris Becker is a patron of the Elton AIDS Foundation.

Boris Becker married twice first to Barbara Feltus on December 17, 1993. Before their marriage, they posed nude for the cover of Astern in a picture taken by Barbara’s father. The couple had two children, Noah Gabriel and Elias Balthasar. Barbara discovered Becker’s extramarital affairs for which she asked for separation in December 2000 and then flew to Miami, Florida with her children. This was after a woman contacted her claiming she was pregnant for Becker. She filed for a divorce and after the trial on January 15, 2001; she received a settlement of $14.4 million, their house in the exclusive Fisher Island and the custody of their two children.

Boris Becker in February 2001, revealed he has a daughter, Anna, with Russian model Angela Ermakova. In 2008, he briefly was engaged to Alessandra Meyer-Wolden, daughter of Axel Meyer-Wolden, Becker’s advisor and manager in the 1990s. They broke up in November 2008. On June 12, 2009, Boris Becker married Dutch model SharlelyKerssenberg in St Moritz, Switzerland. They have a son Amadeus Benedict Edley Luis Becker. Boris Becker was declared bankrupt on June 21, 2017, by the UK’s Bankruptcy and Companies court after he failed to pay in full his long-standing debt to a private bank, Arbuthnot Latham.

Boris Becker won the ITF World Champion in, 1989, ATP Player of the Year, 1989 and ATP Most Improved Player in 1985. He was inducted into the International Tennis Hall of Fame in 2003.