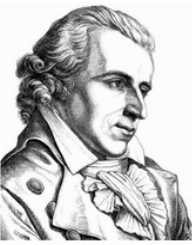 Johann Christoph Friedrich von Schiller was born on November 10, 1759, in Marbach, Württemberg. His father was a military doctor. He grew up in a strictly religious family and studied the Bible a lot in his youth. When Friedrich was born, his father was away in the Seven Year’s War. He also had five sisters. After the war ended in 1763, his father became a recruiting officer, and the family moved to Lorch, near his workplace in SchwäbschGmünd.

Schiller attended school in Lorch, where he received his primary education. His parents wanted him to become a pastor; therefore they sent him to study Latin and Greek with Pastor Moser. At the time his father was deeply unsatisfied with his work. He was not paid for three years, and the family had to live on their savings. When they could not afford to do so anymore, they left Lorch and Schiller’s father took an assignment at the garrison in Ludwigsburg. In Ludwigsburg, Schiller entered the elite military academy founded by Duke of Württemberg. He eventually went on to study medicine.

While at school, Friedrich Schiller was greatly influenced by writers such as Rousseau and Goethe. He wrote his first play The Robbers while at Karlsschule. The play criticized the social corruption, and its connection with the proto-revolutionary republican ideals became an overnight sensation.

After finishing school, Friedrich Schiller was posted in Stuttgart as a regimental doctor. He left the regimen without permission to attend the first performance of The Robber in Mannheim. For this, he was arrested and sentenced to 14 days in prison, as well as forbidden to publish any further works. In 1782, Schiller fled Stuttgart and journeyed to Weimar, settling there in 1787. Two years later, he was appointed as Professor of History and Philosophy in Jena.

In 1799, Friedrich Schiller returned from Jena to Weimar. Goethe had convinced him to continue playwrighting, and the two founded the Weimar Theater. It later became the leading theater in Germany, and the collaboration of two artists helped to lead the renaissance of drama in Germany. Schiller was ennobled in 1802 by Duke of Saxe-Weimar.

During his career, Schiller wrote many philosophical papers on ethics and aesthetics. He was concerned about human freedom, a topic that also guided his historical researches. He was also interested in the concept of the beautiful soul and education of emotions. He wrote two essays addressing the aspect of human freedom and the ability to defy one’s animal instincts.

Friedrich Schiller is mostly known for his playwrighting. He is considered to be Germany’s most important classical playwright. After the success of The Robbers, Schiller wrote the play Fiesco, Intrigue and Love, Don Carlos, and The Wallenstein trilogy. After these, several more plays followed. His last play Demetrius was not finished. Ludwig van Beethoven, Franz Schubert, and Giuseppe Verdi all wrote and adapted music for Schillers plays.

Friedrich Schiller married Charlotte von Lengefeld in 1790. The couple had two sons and two daughters. His last living descendant was a grandchild of his daughter Emilie, Baron Alexander von Gleichen-Russwurm. He died at Baden-Baden in Germany, in 1947.

Schiller was suffering from poor health for all of his life. After finishing medical school, he often tried to cure himself. Schiller died of tuberculosis in Weimar, in 1805, when he was only 45 years old.

His sister-in-law released the first biography of Friedrich Schiller in 1830, titled Schillers Leben (Schiller’s Life). His coffin was brought to Weimar’s Ducal Vault in 1827, the burial place of the house of Saxe-Weimar-Eisenach. This was also Goethe’s resting place after his death. In 2008 it was announced that the skull of the skeleton is not Schillers.