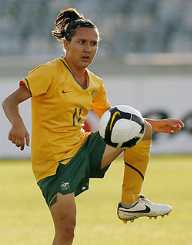 Birgit Prinz is a German female soccer player. This striker has been considered one of the top players in Europe during the 1990s and 2000s.

Birgit Prinz was born on October 25, 1977, in Frankfurt am Main, Germany. She grew up with a love of sports from swimming to soccer.

Birgit Prinz attended the Goethe University Frankfurt. She earned her degree in psychology. Professionally, Prinz is a trained physical therapist.

Soccer started early for Birgit Prinz  When she was nine, she was a member of the SV Dornigheim FC where her father was a coach.  She made the FSV Frankfurt senior league in 1992. The team earned two league crowns and German cup victories during her time with FSV Frankfurt.

As an international player, she gained notice at the age of 16 when she made the game-winning goal against Canada in 1994. Germany won the UEFA European Championships in 1995 and 1997 with Prinz on the team.

In 1998, Prinz became a member of FFC Frankfurt for four years.  That team was also successful including four German Cups and three league crowns.  There was even a European Championship win. In 2002, she spent a season with the Carolina Courage WUSA team and helped the team win the championship.

Birgit Prinz was part of the German World Cup team in three finals. As captain of the team, she made the game-winning goal against Brazil in 2007 which made Germany repeat world champions.

By 2011, Birgit Prinz was not as strong of a player as she used to be.  She was removed from the starting lineup of the World Cup that year. Prinz retired from soccer in May 2012.  Since then, she has worked as a sports psychologist in the youth academy, women's U-17 soccer, and women's TSG 1899 Hoffenheim team.

Birget Prinzis tall at 5'10”, but also demonstrated great speed with made her a force to reckon with on the field. She is one of the top scorers in the German Bundesliga as well as the Women's World Cup.

Eight-time German Player of the Year