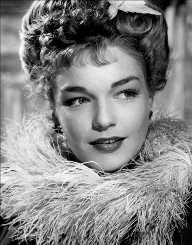 Simone Signoret is a very popular German-born French actress. She is acclaimed as one of the greatest actresses to have graced France film industry. Born on March 25, 1921, Signoret was the first French actress to receive an Academy Award as Best Actress in a Leading Role in 1960. She won the award for her impressive performance and display of talent in the film Room at the Top in 1959.

It was the same film which brought her to stardom and also international fame. Signoret gradually became one of the most decorated actresses after winning an Emmy, two Césars, an NBR Award, three BAFTAs and Cannes Film Festival award among others. She can be said as one of the few actresses with thick skin to withstand any critics.

Simone Henriette Charlotte Kaminker best known as Simone Signoret was born to French parents, André and Georgette in Wiesbaden, Germany. She was the first child of three children by her parents. The family moved to Neuilly-sur-Seine, Paris and that was where Signoret started her education. Growing up, she learned other languages like English, German and Latin. Signoret picked up some jobs to help her family after secondary school because her Jewish dad had fled to England during Nazi’s occupation of France.

Before her movie career, Simone Signoret worked as a typist for French newspaper Les nouveaux temps. She developed an interest in the film industries with her general meetings with some actors and writers at the Café de Flore in Saint-Germain-des-Prés. She was then urged by her friends to venture into it since she had developed that passion. In 1942, Signoret chanced on her some roles making her earn enough for her family upkeep. Gaining roots in the film industry, she adopted her mother’s maiden name to hide her Jewish identity. In 1950, her role in La Ronde earned her some attention through the film was banned in New York for its explicit nature.

Simone Signoret acted in other films like Casque d'Or in 1951, Thérèse Raquin, 1953, and Les Diaboliques, 1954. Four years afterward, Signoret had a breakthrough role in the film Room at the Top. She went on to win Oscar’s Best Female Performance Award in 1960 with her outstanding performance in the film.

Signoret’s growing popularity gained the attention of Hollywood but turned down most invitations she was offered there. In 1962, she starred in Term if Trial opposite Laurence Oliver and appeared in Hollywood movie Ship of Fools and others. In 1966, her role as Lady Macbeth in the Royal Court Theater was known to be her worst ever throughout her career. The play attracted several critics with her English being referred to as “impossibly Gallic.” Signoret was never demoralized with the critics as she continued to display her best at all moments.

In 1977, she played a role in Madame Rosa, and I sent a Letter to my Love in 1980. She got positive reviews for her performance in both films. She also won acclaims from most actors she worked with. Notable among them is Philip Noiret who praised her for in-depth knowledge of the movie industry. He described Simone as very comfortable to work with but also strict and serious about her roles.

Simone Signoret married twice, first to Yves Allegret a filmmaker in 1944 with whom he had two children, one deceased. The couple divorced after five years of marriage, and she moved on to marry Yves Montand, an Italian-born French actor in 1951. They married till she died of pancreatic cancer in 1985. She authored the book, Adieu Volodia, which tells a story of some Jewish Immigrants from Russia and Ukraine and their children who worked in the film industry in Paris between 1926 and 1945. She also published her autobiography; Nostalgia Isn’t What It Used to Be, in 1976. In 1998, French Post Office used her on their postage stamps.

Simone Signoret won several notable awards during her career. She was the first actress to win an Oscar for Best Actress in a Leading Role with her outstanding performance in the film Room at the Top in 1960. In 1966, she won an Emmy Award for Outstanding Single Performance by an Actress in a Leading for her role in A Small Rebellion. She also won three awards from BAFTA, two Césars, and an NBR Award.