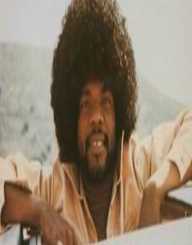 Billy Preston was born on 2nd September 1946. Although born in Houston, Texas, Billy Preston’s mother moved the family to Los Angeles when he was only a year old, as she had separated from Preston’s father. Preston was one of four children.

Billy Preston was as young as three when he began playing keyboards. He was totally self-taught and considered a child prodigy. By the age of ten, he was playing gospel music onstage, backing well-known gospel singers in the church.

At 11 years of age, Billy Preston made his television debut on Nat King Cole’s show. He sang “Blueberry Hill,” made famous by Fats Domino. He also appeared in a show about W.C. Handy, playing the part of Handy when he was younger. Billy Preston joined Little Richard’s band in 1962, as an organist. Whilst performing in Hamburg, he met the Beatles. In 1963 Preston released his debut album, “16 Yr Old Soul”, on the SAR Records label.

In 1965 he released the album, “The Most Exciting Organ Ever.” He went on to join Ray Charles’ band in 1967. He had become very well known by this time, and musicians were asking Billy Preston to collaborate with them in their recording sessions. Billy Preston joined the Beatles in 1969 and recorded with them on their last two albums, Let It Be and Abbey Road (Abbey Road was released first, but was recorded later than Let It Be). It was George Harrison that found Preston, and after the Beatles broke up in 1970, Preston continued to work with Harrison closely.

1969 saw Billy Preston release his first album, which was produced by Harrison. They co-produced Billy Preston’s second album. Billy Preston then went on to appear on several of Harrison’s albums and worked on other projects with him as well.

Billy Preston’s music genres during his solo career covered funk, rock, and soul. His solo career peaked by the mid 1970s and waned after that. Even so, he continued to collaborate with other bands and musicians and spent several years touring and working on albums with the Rolling Stones.

In 1972, Billy Preston had a huge hit with an instrumental track, “Outa-Space.” He won a Grammy award for the track, and a gold disc by the Recording Industry Association of America.

His two other most well-known hits were, “Will it Go Round in Circles” and “Nothing from Nothing.”

Billy Preston was arrested in 1991 for insurance fraud, after setting fire to his own house. The same year, he was arrested a second time for sexually assaulting a 16-year-old boy. He was also treated for cocaine and alcohol addictions. He received a nine-month sentence in a drug rehabilitation center, followed by three months’ house arrest. Billy Preston on to overcome his problems and continued to work with artists such as Ringo Starr and Eric Clapton, amongst others.

Billy Preston continued to work, making several appearances throughout the years, right up until 2005 when he made his last appearance.

As a boy, Billy Preston had been sexually abused and struggled with his sexual orientation most of his life. Although his close friends knew he was gay, Preston didn’t publicly announce it until just before his death. It was felt that he struggled with the fact, due to being so religious, and it was at odds with his religious beliefs. Billy Preston was ill in later years with kidney disease, and even after a transplant, his health declined until he died.

Billy Preston will be remembered for his talent, most notably, the only musician to share credit with the Beatles on one of their albums.