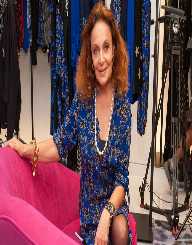 Diane von Fürstenberg is a Belgian-American Fashion Designer born on December 31st, 1946. She is best remembered for her 1972 “wrap dress” design. She is among the top fashion designers in the world. During her career, she established her label known as Diane von Furstenberg or DVF. Currently, she is the Council of Fashion Designers of America –CFDA’s president.

Diane von Fürstenberg was born on December 31st, 1946. Her place of birth was Brussels in Belgium. Her father Leon Halfin originated from Roman. He earned a living as an electronics executive. Her mother Liliane Nahmias, on the other hand, was a survivor of Holocaust born to a Greek family.  Liliane Nahmias greatly influenced her daughter to be fearless. According to Diane, her mother made her the fearless and confident person that she grew up to be.

Immediately after her graduation, Diane von Fürstenberg started her career in Paris. While there she assisted a fashion photographer’s agent known as Albert Koski. After he while she left for Italy where she worked at Angelo Ferretti’s textile factory. This is where her passion for design kicked off. She was able to learn different design skills like the way materials were cut and their colors as well. She tested her skills when she came up with garments using silk jersey fabric of Ferretti. This marked the first work to her successful career.

In 1969, Diane von Fürstenberg officially began her design career. She had just moved to New York City the time. She did her work right form her apartment. She came up with new designs while marketing the ready ones. By April 1970, she had completed her first collections and exhibited them. They were displayed in Gotham Hotel in New York City. In 1972, her father assisted in funding her own business which she opened in Seventh Avenue.

Diane von Fürstenberg displayed her designs in her showroom and “Angela” particularly led her to her fame. Her career even went to greater heights of success in 1972. This was with her design “wrap dress.” The dress was a huge success, and every woman wanted a piece of it. It became great empowerment for many women at the time. She later launched “Tatiana” in 1972, which was a perfume and cosmetic line.

From 1983 to 1997, Diane von Fürstenberg took a break from her fashion career. She then devoted her time to her three coffee-table books. In 1997 she continued her design career. In 2011 she launched another collection “Diane” which she named “core of DVF.”

In 2005, Diane von Fürstenberg was honored by the Council of Fashion Designers America- CFDA. This was a lifetime award. Later in 2008 she was once again honored with a star by The Seventh Avenue Fashion Walk of Fame.

Diane von Fürstenberg tied the knot with Prince Egon of Furstenberg in1969. They were a married couple for only three years. During this time they were blessed with two children: Prince Alexander and Princess Tatiana. After her divorce, she was involved in other relationships. She was with Richard Gere before she got involved with Ryan O’Neal and Warren Beatty. In 1985 she was involved with Alain Elkann which lasted until 1989. She then got married to Barry Diller in 2001. He was a media tycoon. Together they established the Diller-Von Furstenberg Family Foundation.