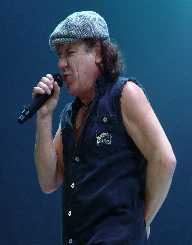 Angus Young is not just a guitarist, but one of the finest Australia has had in their music industry. Born on March 31, 1955, he is the co-founder of and lead guitarist of the Australian hard rock band AC/DC. Not just, that, he is a songwriter and has written most of the song of the band. His creativity, agility and enthusiastic display of performance coupled with his signature schoolboy uniform used on stage and duckwalk make him unique among other members of the band. Young and other members of the band were inducted into the Rock and Roll Hall of Fame in 2003.

He is also ranked 24th in the 100 greatest guitarists of all time compiled by Rolling Stone magazine. The creation of Angus Young SG was a collaborative effort between the Gibson Guitar Company and Young. The guitar’s pickup was designed by Young himself.

Angus Young was born on March 31, 1955, in Glasgow, Scotland to William and Alexandra Young. He is the youngest of eight childrenof his parents. At age eight, his parent and other three siblings, Malcolm, George and Margaretmoved from Scotland to Sydney. Angus Young had his education at the Ashfield Boys High School but later dropped out to pursue music. As a beginner without funds, the instrument he started with was abanjo. Later, his mother found the need to get him a guitar so bought him a second-hand acoustic guitar for practice. At this while, young had developed much interest inplaying the guitar so bought a second hand Gibson SG which was better than what his mother got him.

Angus Young started his musical career with a local group, Kantuckee. Among the members were Bob McGlynn, vocal, Jon Stevens, bass and Trevor James, drums and himself. They performed together till some members broke away. The band then had a name change to Tantrum with a new member Mark Sneddon whileBob McGlynn left.

Formation And Career At AC/DC

In 1973, Young’s elder brother Malcolm formed the rock band AC/DC which required young to leave Tantrum to join as a lead guitarist. The AC/DC was reached after they saw the inscription on their sister’s machine. They added other members like Colin Burgess, drummer, Larry Van Kriedt, bass guitarist and Dave Evans, as avocalist. Angus Young wanted to be unique among other members, so he tried costumes like the Super-Man, Spider-Man, gorilla, and Zorro among others on stage, but none was favorable for him. Upon his sister, Margaret advice, Angus Young settledon using school uniform which would later become his signature costume.

His sister then sold him a uniform but after sometimes used his former school uniform. It was still in good condition since he didn’t use it much because he dropped out of school. After coming out with the single, AC/DC followed it with their debut album High Voltage in 1975. With high power and impeccable performances, the band became a household name in Australia. Their artistic display was just enough to win the hearts of hard rock fans. Other albums like Dirty Deeds Done Dirt Cheap, Let There be Rock, Powerage and T.N.T were also released to further surge their popularity. With the release of the studio album Highway to Hell, hell truly broke loose as the album became very popular and also increased their purse by becoming the best-selling album at the time.

Death Of Scott And Subsequent Success

The band continued to celebrate their success and achievements until the worse happened. Bon Scott, who was the lead singer and an integral member died from alcohol poisoning. The band though in sorrow recruited another lead singer, former Geordie singer, singer Brain John. AC/DC came out with the tribute album Back in Black in honor of Scott. As if Scott’s death was a blessing in disguise, the album was a huge success and achieving 22x platinum in the US. Not just that Back in Black sold 50 million copies become the second highest selling albums worldwide just next to Thriller by Michael Jackson. In their sorry was a success, but could that feat be maintained was a question many may have asked. Not relenting on their success, AC/DC released a follow-up album, For Those About to Rock We Salute You in 1981.

From that moment AC/DC began to decline and even the release of albums like Fly on the Wall, Blow Up Your Video and Flick of the Switch couldn’t save the sinking band not until they came up with The Razor Edge in 1990. The Razor Edge brought the band back to its feet as the famous rock band in Australia. The album sold about 12 million copies reaching 5× multi-platinum in the US. The band also released albums like Ballbreaker, Stiff Upper Lip, Black Ice and many others.AC/DC has since seen most of its members retired either forcibly or on personal ground. Malcolm Young retired due to poor health; singer Brain Johnson left on doctor’s advice and drummer Phil Rudd on personal grounds.

Angus Young was replaced by his nephew Stevie Young and other members like Axl Rose former member of Gun N Rose as a singer in place of Brain in 2016. The band had previously released Rock or Bust in 2014 and had since embarked on the Rock and Bust world tour.

Angus Young is married to Ellen Young. The couple has homes in Netherland, Australia, and the UK. He is an ardent supporter of Rangers.

Angus Young and all other AC/DC members were inducted into the Rock and Roll Hall of Fame in 2003. He received a Legend Award from the Kerrang! Magazine in 2006 and Rolling Stone Magazine ranks him 24th in the 100 greatest guitarists of all time. A poll conducted by Australian Guitar Magazine on August 24, 2012, puts Young as Best Australian Guitarist of All Time.MTV also named DC/AC as the 7th "Greatest heavy metal band of all time."