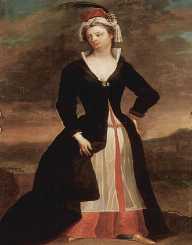 Mary Wollstonecraft was an English writer, women activist and a philosopher. Born on April 27, 1759, she lived a relatively short life, but her works are being referred to in the modern day feminist activism. Mary Wollstonecraft did several works, including novels, conduct books, treaties, and history on the French Revolution.

She is known for her work, A Vindication of the Rights of Women in 1972 in which Mary Wollstonecraft points that women are naturally not inferior compared to men; however, due to lack of education for women, they turn to look inferior calling on the need for both sex to be given the same treatment and opportunity.

Her image was, however, dented and works buried after her death due to a memoir published by his husband, William Godwin. The memory revealed Mary Wollstonecraft affairs and illegitimate children. Nonetheless, with the inception of 20th and 21st-century feminist movements, her works were resurfaced. She is now seen as one of the founding philosophers of feminism.

Mary Wollstonecraft was born in Spitalfields, London, England as the second of seven children of John Wollstonecraft and Elizabeth Dixon. Born in the financially sound family, they gradually became income-strapped due to his father’s unsuccessful investments. Being an abusive father, he forced Mary Wollstonecraft to turn over money meant for her future inheritance.

He was also very violent towards his wife, especially when drunk. Growing up, her friendship with Jane Arden in Beverley and Fanny Blood would define her future works. Her friendship with Jane was more of an academic and intellectual one where the two read books together and also attended lectures of Arden’s father. The one Fanny Blood also broadened her horizon, making her a critical thinker.

Mary Wollstonecraft picked a job as a lady companion to Sarah Dawson a widow in Bath in 1778, a lady she couldn’t move along with. Her stay with Dawsonwouldinform her book Thought on the Education of Daughters in 1787. Mary Wollstonecraft left upon a call to cater for her sick mother in 1780.

Mary Wollstonecraft moved to Ireland and got a job as an instructor to the daughters of an Anglo-Irish Kingsborough family. Her stay with them would also motivate her only children’s book, Original Stories from Real Life in 1788. In 1787, Mary Wollstonecraft wrote to her sister Everina stating that she wants to become the first of a new genius by becoming an author. Within that time, women in writing were rear.

With her passion for writing, Mary Wollstonecraft traveled to London, and there she met Joseph Johnson, a liberal publisher who rendered her some assistance in1987. There she learned German and French to be able to translate works of other writers and wrote reviews. Some of her translations work at the time includes Jacques Necker’s Of the Importance of Religious Opinions and Christian Gotthilf Salzmann’s Elements of Morality, for the Use of Children. She also kept company with well-established writers and philosophers like Thomas Paine and William Godwin which broadened her intellectual capacity.

Mary Wollstonecraft also wrote Vindication of the Right of Woman in 1792. In 1792, she set for France where she met Gilbert Imlay, an American adventure and fell in love life. She got pregnant for him and received her first child Fanny on May 14, 1794, in Le Havre.

was during this time that she wrote A Historical and Moral View of the French Revolution, published in 1794 in London. Imlay later left Mary Wollstonecraft and her child though he promised to return, he never did. With unsuccessful contact with Imlay, Wollstonecraft returned to London in his search.

Mary Wollstonecraft after not hearing from Imlay moved from France to London in April 1795 only to be disappointed. As her persuasion to get Imlay back into her life, she tried committing suicide twice. Her first suicide attempt was the intake of laudanum, but with the timely intervention of Imlay, she was saved. Still not satisfied, Mary Wollstonecraft left a very touching note for Imlay and made her second attempt by jumping into the River Thames.

She was once again saved by some onlookers. With time she was able to overcome all the pains and sorrows and went back to her writing career by joining the Joseph Johnson’s circle. It was within this time she husbands William Godwin in 1978. The marriage was, however, a short one as Mary Wollstonecraft died few days after delivering her daughter Mary that same year.

After Mary Wollstonecraft death, Godwin wrote a memoir in her honor which would rather dent Wollstonecraft image and reputation for more than a century. Devastated Godwin published the Memoir of the Author of A Vindication of the Right of Woman in 1798. In the memoir, he reviewed all past relationships and illegitimate children and the attempts to commit suicide. The memory which was aimed at glorifying Mary Wollstonecraft for her pains and sorrow and how strong she was to overcome them rather turned sour. A writer, Robert Southey rather criticised Godwin for stripping his wife naked and bringing her into public ridicule.

Critics of Mary Wollstonecraft picked up on it and used it against her, saying no self-respecting woman would read works of Mary Wollstonecraft. But for readers like Elizabeth Barratt Browning, Lucretia Mott and Elizabeth Cady Stanton and other 20th-century feminist and women activist, her works would have been buried forever. Her works like Right of Woman which was focused on education was used to champion education for woman. She became a subject of doctoral thesis1898. With the advent of modern feminist movement has been used and as at now, she is known as one of theforemothers of feminism.

Mary Wollstonecraft did several works within her short writing career. At the start of her career, most of the works were based on education. Aside from that, she also translated works of other writers. Some of her early works include Thought on the Education of Daughters, 1787, the children’s book, Original Stories from Real Life, 1788. In these books, Mary Wollstonecraft championed the education of the children, especially the girl child to become, self-discipline, honest, competent and have self-contentment. Some of her of her other works include Vindication of the Right of Men, 1790, Vindication of Right of Woman, 1792, Mary A Fiction and The Wrongs of Woman among others.

Mary Wollstonecraft was involved in several relationships before meeting her husband, William Godwin. The couple was blessed with a daughter, Mary. It was through the delivering of Mary that Wollstonecraft developed complication when her placenta broke and got infested with puerperal fever. She died of septicemia ten days later on September 10, 1797.  Mary Wollstonecraft relationship with Gilbert Imlay also produced a child called Fanny.