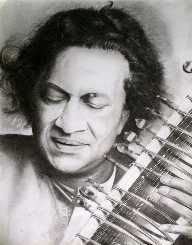 Mr.Rabindra Shankar Chowdhury was born on 7th April 1920 in Benares (now Varanasi). Later in his life, he changed his name to Ravi Shankar by dropping his family name.

Ravi Shankar had an elder brother by name Uday. Uday was a choreographer and a dancer. He created a dance troupe. Ravi Shankar, at a very tender age of 10, joined his brother, Uday in his dance troupe and toured extensively along with the troupe including Paris.

He learned dancing and playing Indian musical instruments. Ravi Shankar also learned French and western customs. Uday, during his entourage of Europe, got acquainted with the famous Court musician, Allauddin Khan. Allauddin Khan recognized the talent of Ravi Shankar as a musician and taught him music. Ravi Shankar gave up dance and took up music rigorously under the guidance of Khan.

Ravi Shankar learned Indian classical music, playing sitar and other instruments through rigorous training and devotion to music. The training under Khan was completed in 1944.

Ravi Shankar gave his first public performance along with his teacher, Allauddin Khan in 1939. He moved to Bombay (Mumbai) in 1944 after completing his training and was the composer of music for an organization. He recorded music as well. He worked for Govt. of India for seven years as music director and composer. He was responsible for founding a school of music in Mumbai.

His compositions were a melodious mixing of Western and Indian instruments. He was also a music director for some Hindi movies.

1. Performance was given under the Indo Soviet Cultural Programme

3. He toured western countries like USA, UK, Australia and Europe and educated them about the Indian music.

4. He composed music for non-Indianfilms.

5. Participated in a musical festival at Paris

7. He Chaired the Indian music and was a guest lecturer in the University of Music in the USA.

8. He recorded his best album in early 1970, and it was the best Recording leading to his 2nd Grammy Award.

9. Performed a concert in Russia with a mixed group of Russian musicians and Ravi Shankar group.

10. He was a Professor at the University of California.

Ravi Shankar has a large number of Awards, and a few have been mentioned.

1. Won Grammy Award for his performance in collaboration with a Western violinist.

3. Awarded for “Best Music” for his work in a movie, Gandhi and many more and so the list goes on.

Style of Music and Compositions.

The compositions rendered by Ravi Shankar is unique and has no parallel. He is one of the best top sitar players.

Ravi Shankar married Annapurna Devi in 1941. Their son, Saubendra Shankar was born in 1942. He separated from Devi to have a relationship with Kamala Shastri, a dancer and stayed with her till 1981. Shankar had a child, Norah Jones, in 1979 from Sue Jones, a New Yorker, and was staying with her till 1986.

He again married SukanyaRajan and their daughter, Anousha Shankar was born in 1981. Shankar stayed with Sukanya in the USA. The children of Ravi Shankar were talented like Ravi Shankar