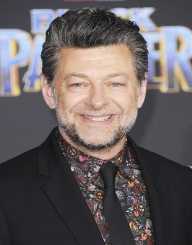 Andy Serkis was born on April 20th, in 1964. He is a famed British actor mainly for his role as Gollum in the hit film series called Lord of the Rings. Additionally, he also earned himself critical acclaim after featuring as Caesar in Planet of the Apes film series.

Andrew Clement Serkis alias Andy Serkis was born on April 20th, in 1964. His parents Lylie and Clement Serkis raised him in Ruislip Manor, Middlesex. His mother worked as a teacher. His father, on the other hand, was a gynaecologist.

To enter into the TV industry, Andy Serkis took on minor roles in shows such as The Darling Buds of May -1992. It took him a couple of years before finally landing on his first lead role in 2008. During this year, he starred in Einstein and Eddington. He played the role of Albert Einstein.

Andy Serkis rose to the limelight in 2001. He landed on the recurrent role of Gollum in The Lord of the Rings. This is a role that he played in all the three sequels of the hit film.

Andy Serkis tied the knot to Lorraine Ashbourne in 2002. He is a proud father of three children.