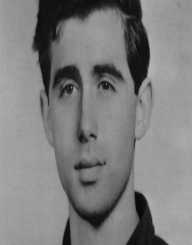 American civil rights activist Andrew Goodman was born on November 23, 1943. He was raised on the Upper West Side of New York City. He was the second of three sons of his parent’s. Goodman became a social activist at an early age. He and his family were members of a socially progressive community and were devoted to social justice.
Goodman attended the Walden School in New York, which had a strong influence on his outlook. After finishing his high school education, Goodman enrolled at University of Wisconsin-Madison. He attended the Honors Program but had to leave after a semester, since he fell ill with pneumonia.

After recovering from his condition, Goodman enrolled at Queens College in New York City. There he met Paul Simon, who was his classmate and quickly became friends. Goodman already had experience as an off-Broadway actor. Therefore he planned to study drama. Later he changed his mind and switched to studying anthropology. His studies helped him developing his views and increase his political seriousness.

Andrew Goodman became increasingly involved in the Civil Rights Movement in 1964. Along with other activists, such as Mickey Schwerner and his wife Rita, and James Chaney, he started to work on the “Freedom Summer” project of the Congress of Racial Equality. The work was aimed to register blacks to vote in Mississippi. Goodman also protested president Lyndon Johnson’s presence at the opening of World’s Fair in 1964. After this event, Goodman went to Oxford, Ohio to develop civil rights strategies at Western College for Women. After his visit to Ohio, Goodman went to join Schwerner in Mississippi, where Schwerer was the head of the field office.

Mississippi State Sovereignty Commission was opposed to integration and civil rights. The Commission even hired spies to identify activists, especially ones who entered the state form the North. On June 21, 1964, Schwerner, Goodman and Chaney set out for Philadelphia’s Neshoba County to investigate a burning of Mount Zion Methodist Church. The church was also a sight for a religious school for education and voter registration.

After their return to Meridian, the three activists were arrested by Deputy Sheriff Cecil Price, who was a member of the KKK. They were accused of speeding- driving 35 miles over the 20-miles-per-hour limit. They were taken to jail in Neshoba County, where the driver Chaney was booked for speeding, while the other two-for investigation. Chaney was fined 20 dollars and they were released.

Sherriff Price ordered the three men to leave the county and followed them in his car. He caught up with them before the trio were able to enter the safety of Lauderdale County. Price took them into his car and drove them to a deserted area on Rock Cut Road. He was also followed by two cars of other members of the Klan. They were turned into the hands of Klansmen and beat Chaney up, afterward shooting and killing all three of them.

After the three men disappeared, FBI entered the investigation of the case. They found the three men buried in a dam. The case was prosecuted under the 1870 Force Act, convicting the deputy sheriff and six other men of civil rights violations. They were not convicted of murder.

The journalist for Jackson Clarion-Ledger, Jerry Mitchel has extensively written about the case of Goodman, Schwerner, and Chaney. His documentary produced new evidence and reasons to reopen this case. Mitchel was able to discover the person who informed the FBI about the three bodies, until then known as Mr. X.

In 2004, there was enough evidence for a murder charge and grand jury hearing. The following year, Edgar Ray Killen was arrested and found guilty of three counts of manslaughter, for which he was sentenced to 60 years in prison.

In 1966, The Andrew Goodman foundation was started to carry on his legacy. His parents continued to work on the foundation. After Goodman’s mother's death, his younger brother took over the foundation. For years the organization was private, but in 2012, it became a public charity.

In 2002, a peak in the Adirondack Mountains was named after Goodman, to honor his memory. Goodman, Cheney, and Schwerner have all received a posthumous Presidential Medal of Freedom.