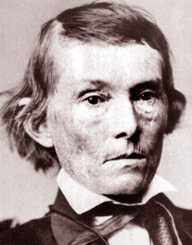 Alexander Hamilton Stephens was a Democratic American politician and the 50th Governor of Georgia. Born on February 11, 1812, he went into politics in 1836 and since served in different capacities. Stephens served as the governor of Georgia from 1882 until his death in 1883. Before rising to that office, won an election to the Georgia House of Representative from 1836 to 1841.

While there, Alexander Stephens opposed the Mexican-American War, supported the Compromise of 1850 and helped in drafting the Georgia Platform that opposed the secession.

Alexander Stephens also supported the passage of the Kansas-Nebraska Act for the expansion of slavery. From 1861 to 1865, he served as the vice president of the Confederate States during the American Civil War. Stephens also served in the House of Representatives from 1873 until 1882, when he resigned to become the Governor of Georgia.

When Alexander Stephens was 14 years, he lost both his father and stepmother and therefore had to live with his mother’s brother General Aaron W. Grier. Aaron owned a vast library, from where young Stephens read avidly. Growing up from an impoverished and challenging background, Stephens received education through several benefactors including Presbyterian minister Alexander Hamilton Webster from whom he adopted the middle name, “Hamilton.”

Alexander Stephens received instruction at the Franklin College (now the University of Georgia) in Athens. He was a member of the Phi Kappa Literary Society and graduated in 1832. After graduating, he taught for some years before quitting to enroll for a law course. He became a member of the bar in 1834.

Alexander Stephens' career paid off, as he became one of the reputable defends lawyers in Crawfordsville. He was successful in protecting all wrongfully accused clients, and none of them charged with capital crimes was executed.

Throughout his 32 years of law practice, Alexander Stephens gained wealth, fame, and as a proponent of slavery, owned slaves.

Alexander Stephens went into politics in 1836 winning an election to the Georgia House of Representatives and served until 1841. He then served in the Georgia Senate from 1841 to 1842.

Alexander Stephens rose steadily in his political career, and as his popularity grew, he won a special election to the US House of Representative as a Whig in 1843 after the resignation of Mark A. Cooper. He served in the house until 1857. He however switched political party and joined the Democratic Party in 1855, representing the Party in the House from 1855 to 1857.

Alexander Stephens became one of the leading Southern Whigs in the House. He supported slavery and opposed the Wilmot Proviso, which would have prevented the extension of slavery into territories acquired during the American Civil War. Stephens endorsed the annexation of Texas in 1845. As a strong proponent of slavery, he supported the Compromise of 1850 and the Kansas-Nebraska Act of 1854, which also sought to extend slavery in US territories.

Vice President of the Confederate State and Later Life

During the American Civil War, Stephen was against the exercise of extra-constitutional war powers by the Confederate President Jefferson Davis. In February 1865, he led the Confederate commission to the abortive of the peace conference.

That same month, he was one of the three Confederates commissioners who unsuccessfully negotiated with Abraham Lincoln on the steamer River Queen at the Hampton Roads Conference to end the War.

Alexander Stephens was arrested on May 11, 1865, after the fall of the Confederacy. He was imprisoned in the Fort Warren, in Boston for five months. After his release, he contested and won an election to the US Senate in 1966 but was denied a seat because Georgia at the time did not meet congressional guidelines.

Alexander Stephens served in the US House of Representatives from 1873 to 1882 when he resigned. He became the Governor of Georgia in 1882, serving until his death in 1883.