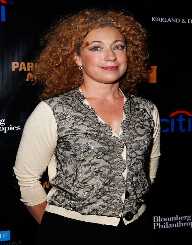 Alex Kingston was born on March 11th, 1963. Her place of birth was in, Surrey, England, in the United Kingdom. She is the eldest daughter of Anthony Kingston and Margaret he. Anthony earned a living as a butcher.

Alex Kingston has two sisters, Susie and Nicola. Sadly, Susie had difficulties during her birth hence became physically and mentally disabled. Her sister Nicola, on the other hand, was among the actors of The Fortunes and Misfortunes of Moll Flanders (1996). Actor Walter Renneisen is her maternal uncle.

Alex Kingston attended Rosebery School for Girls. During her studies there, one of her teachers realized her acting talent and encouraged her to pursue it as a career. Therefore, she auditioned for a role in Tom Jones and was accepted. She later attended the Royal Academy of Dramatic Art for a three years programme. After that, she joined the Royal Shakespeare Company.

The 1997 medical drama ER made Alex Kingston quite famous. She appeared in the fourth season of the film in the "Ambush" episode which won an award. She concluded her role with "Fear" episode of season 11 in October 2004. Later in 2004, she reappeared in the series in its 15th season which was also the final. In 2005, she played the role of Lucy Costin in Without a Trace as a guest in its season 4 episodes.

The following year, Alex Kingston acted the role of Nurse Ratched in One Flew Over the Cuckoo's Nest opposite Christian Slater. Later in 2008, she made a guest appearance in Doctor Who. In the same year, she also featured in Lost in Austen and CSI: Crime Scene Investigation.

While studying at the Royal Academy of Dramatic Art, Alex Kingston met Ralph Fiennes, the English actor. They dated for ten years before exchanging vows later in 1993. Two years later, her husband had an affair with actress Francesca Annis. Eventually, the couple divorced in 1997.

Towards the fall of 1998, Alex Kingston tied the knot the second time with Florian Haertel. In March 2001, they were blessed with a baby girl and named her Salome Haertel. In 2010, the couple parted ways. Later in July 2015, Alex Kingston wedded her third husband, Jonathan Stamp. He is a Television producer.